Entertainment for the Gala will be a performance by Grammy Award winner Peter Frampton whose hits include “Do You Feel Like We Do” and “Show Me the Way.” Joseph Titlebaum will serve as Gala Chair.  The Gala will feature the Inaugural Legacy Awards honoring clinicians’ career achievements in the field of pancreas disease. These first-time awards will honor Dr. Peter Banks and Dr. Bill Go. An additional Legacy Award will be featured for volunteerism. The evening will also feature the launch of Camp Hope, a pediatric pancreatitis family weekend camp, as well as testimonials from patients and celebrities.

Legacy Awards will be given for life-long contributions in the field of pancreatic cancer and pancreatitis throughout the United States as well as a Volunteer of The Year Award. 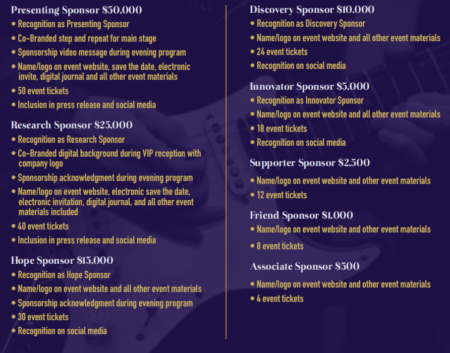