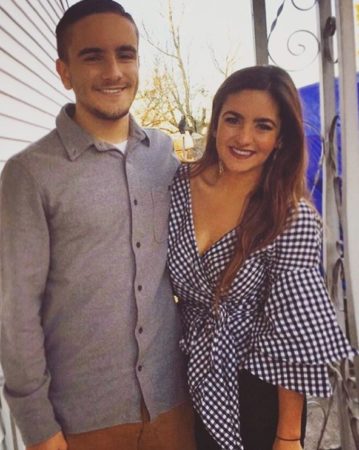 Adam with his sister

Adam Barbosa is 20 years-old and from Rhode Island. He had his first pancreatitis episode at 15 years-old when he was a sophomore in high school. It wasn’t until his third attack, that the doctors told him he had two genetic mutations (SPINK1 & CFTR) and a physical mutation (pancreas divisum) and officially diagnosed him with chronic pancreatitis. Adam was a recipient of the NPF Courage Award on October 19, 2017 at the NPF Boston Gala. While in HS, he fought to keep up with his studies and graduated achieving a GPA of 3.49 and yielding one of the highest SAT scores in his graduating class.

After his pancreatitis attacks became increasingly severe, in 2019, Adam chose to have the TPIAT surgery at the University of Minnesota. Each day, recovery is a battle, but the surgery has given him back pieces of his life. Adam’s goal is to be a graduate from The University of Rhode Island’s College of Nursing where he is a student.

With your first pancreatitis attack, what did you think it was initially?

At first, I thought it was just a crazy bad stomach bug, so I kept on going to school without telling anyone. After two days of being hunched over in constant pain, I told my parents that I think I might need to go to the doctors. Assuming I was just trying to get out of finals, they told me that I’d have to keep going to school until finals were over, so that meant another two days of the worst pain imaginable. When they finally did take me to the doctors, I was rushed into the ER after my bloodwork came back showing that my lipase and amylase levels were in the thousands (in a healthy person, they should be 50).

Did your doctors know it was pancreatitis right away?

At first the doctors said that I had an episode of acute pancreatitis and it was probably alcohol-induced, even though I never touched a drop of alcohol in my life. Six months later, it happened again… then again. The time between attacks kept going down; six months, then three, then two, then every month, then twice a month, each visit lasting 5-7 days. I missed so many holidays and birthdays. After the third attack, they realized that I had two genetic mutations (SPINK1 & CFTR) and a physical mutation (pancreas divisum) and they diagnosed me with chronic pancreatitis 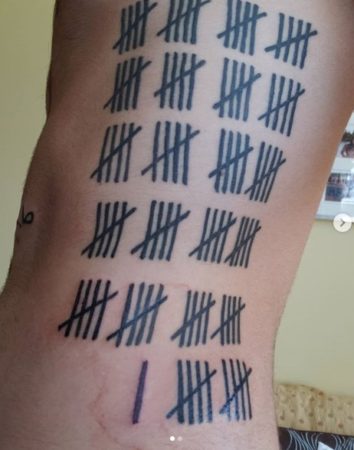 Tally marks tattoo, representing the number of nights Adam stayed in the hospital

How often were your hospital stays?

In total, I spent 111 nights in a hospital bed. It was actually the inspiration behind my tally mark tattoos! After every other admission, I’d get the tattoo updated. The worse my disease got, the bigger my tattoo grew. After the surgery, I made the last tally mark purple to signify that my struggle was over once and for all.

Before my diagnosis, my life was pretty average. I felt like the background character in someone else’s movie. I hated it. I constantly wished that literally ANYTHING would happen just to make things interesting. When it did, I took back everything I said. I wanted to feel like the main character for once, and now I did, only it was a horror movie. I can’t describe what it’s like to be a scared, sick kid and hear the doctors say they don’t know how to treat you. 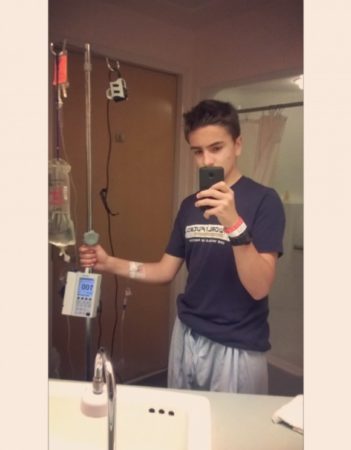 What was your life like living with pancreatitis attacks? What did you have to do differently to work around this illness? (Was your social life changed in anyway? Did your friends understand what pancreatitis was? Did it affect your schooling as well? Were there things that triggered your pancreatitis that you had to avoid?)

Living with pancreatitis was awful. I could never plan anything too far in advance. Wherever I was, I always had to know where the closest hospital was. Imagine living life knowing there’s a time bomb inside you that could go off at any second. My friends had to know the signs of an attack. More than once I can remember my friends driving 50 over the speed limit, racing me to the hospital while I screamed and convulsed In the passenger side, then my friends yelling for nurses while I screamed in the ER, and through gritted teeth, I’d explain to them that the wait can take hours, and that’s normal. They’d be nervous the entire time they were with me. I was a liability. Eventually, I stopped hanging out with friends. I didn’t want to worry them. I didn’t want to worry anyone. My entire existence felt like an inconvenience, and I’d be lying if I said I never thought about ending it at least once throughout the entire thing. In terms of school, I had to be put on a disability plan to accommodate for missing class time from all the hospital visits. Most of the time, professors understood and let me do whatever I had to do to succeed; however there were several occasions where a teacher or professor couldn’t grasp the concept of missing class and not doing work because you were in excruciating pain and loads of opiates. The best I could do was bite my tongue and bust my ass in order to maintain straight A’s in nursing school. The worst part was how unpredictable my attacks were. There were no known triggers, so I couldn’t do anything to proactively avoid them other than hope for the best. Also, it’s always been my dream to join the US Army Nurse Corps, and now I’m not sure that will be possible due to my medical history. That hurts. 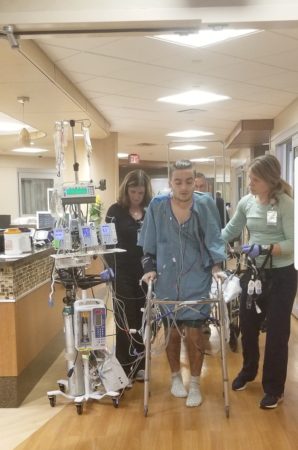 What was the main factor in the TPIAT surgery? Had you ever had surgery before?

The main factor for me in choosing to get the TPAIT surgery was when I just started my fourth semester in nursing school and immediately had an episode of pancreatitis. Once I got back to school and saw how behind I was right out of the gate, and once I realized that I could very well be hospitalized several more times in the semester, I decided my only option would be to take a semester off and get the surgery. In the time I was gone from school, I had three more episodes of pancreatitis. I knew I made the right choice because I would’ve never been able to succeed with that many setbacks. We discovered the surgery months prior when I had the worst attack of my life while visiting friends in California (my levels were around 10,000), but we weren’t sure I was bad enough to need surgery yet. The only surgery I had before this was an ERCP and getting stents put into my pancreatic ducts, which did not help me at all. If anything, it made me worse because the procedure itself triggered an attack.

Recovery from the surgery. Was. AWFUL. Yes, I recommend anybody with worsening pancreatic disease get it, but I cannot stress enough how difficult the recovery is. The pain you feel afterward is something that is not of this world. I knew it would be the worst pain ever, but nothing could’ve prepared me for waking up and feeling how I felt. After a week or two, the pain goes away, but the recovery almost becomes harder. You can barely move, you’re isolated, you miss your friends, your family, your home. You see others going to school or advancing in their job and you’re just stuck and there’s nothing you can do about it. The good news is that it DOES get better! Once you’re clear to go back home, very little gets in the way of living a completely normal life! Granted, you will have less energy and get more tired more quickly, but that to will subside! 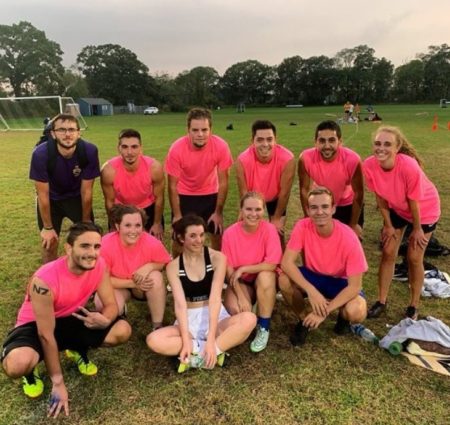 Any illness will take a toll on you mentally and physically. For kids that are living with pancreatitis as well, what piece(s) of advice would you tell them to help them get through this? What would you tell patients?

To everyone suffering from this disease, please remember one thing: this is not the end of your story; this is the beginning of your comeback story! There are many examples of people who have gone through far worse and still became wildly successful! Never settle for an average life, you know you deserve more than that! Don’t let your vices get in the way of your virtues! I had no idea what I wanted to do with my life before pancreatitis, and now, I’m grateful that I got it, because it has inspired me to become the best nurse there is because of how much my nurses did for me. Now, I’m at the University of Rhode Island, majoring in nursing, double minoring in psychology and thanatology. I’m in three different honors societies, I have a scholarship and my plan is to get my doctorate in nursing practice so I can become a nurse anesthetist. I’m the only one in my family’s history to have this condition, and it’s looking like I’m on track to become the first doctor in the history of my family. You can do anything!

The biggest thing I’ve had to help me through recovery is my amazing, supportive friends from URI and Portsmouth; to the ones that messaged me and talked to me every single day for the months I was gone, I’m only still here because of you. You know who you are. Another thing that helped me personally was listening to “Fearless Motivation” on Spotify. I know it sounds silly, but it’s easy to lose motivation & drive from time to time, and these speeches helped to remind me what I was capable of.

How are you feeling now? And how is your life now post-TPIAT?

I don’t feel 100%  10 months post-op, but It’s definitely closer to normal than pancreatitis ever was. I get tired very quickly, it’s harder for me to focus, I forget things more easily, but it’s definitely been getting much better week after week. From time to time, I’ll have episodes of phantom pain that last a few minutes, but a few minutes is much better than five days in a hospital. There are good days but I also have an overwhelming amount of bad days.  I am in touch with my endocrinologist, Dr. Melena Bellin, every month, providing her with data on my diabetes where she will make adjustments.

How did you and your family learn about The National Pancreas Foundation?

My and my family actually learned about The National Pancreas Foundation after my doctor in Boston told me that he nominated me for a 2017 courage award and I won! Through the gala, I met Rose Gefteas, another award winner who underwent the surgery. After talking with her and Cecilia Petricone (another TPAIT patient), that’s when my family and I made the decision to get the TPAIT procedure done at the University of Minnesota. The National Pancreas Foundation saved my family’s life in more ways than one, and I’d like to consider them part of my family.