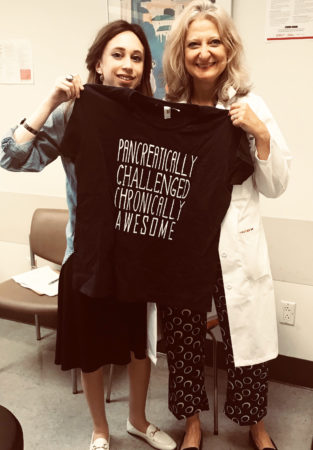 My introduction to pancreatitis began at age 6. For the next four years I experienced repeated episodes, however, my pediatrician dismissed it as a virus each time. At age 10 the episodes lasted for six weeks before our pediatrician ordered labs. My enzyme levels were elevated and I was taken to the ER in a pretty bad and malnourished state. My younger brother Moishy was also diagnosed with pancreatitis but had a smoother and quicker experience when it came to a diagnosis. Since my diagnosis, Dr. David Whitcomb had already pinpointed the gene and the medical community was slowly inching forward to more awareness of pediatric chronic pancreatitis.

My cause for chronic pancreatitis (CP) was labeled as “unknown”. I distinctly remember being questioned at age 10 in the ER if I “drink” or “smoke” The only cause that could explain a pediatric onset of CP was Cystic fibrosis. They repeatedly tested me for CF and were puzzled when it came back negative. Our symptoms pretty much followed the same trajectory. Upper abdominal pain, vomiting, upper and mid back pain, fevers were the hallmark. Moishy has a very severe case, within the next 3 years post-diagnosis he had been hospitalized multiple times. Moishys’ pancreas was hemorrhaging for a period of about six months. Unfortunately, it took a very long for his doctors to determine the source of his bleeding. He would frequently vomit blood and he suffered from severe anemia. My parents consulted with many teams in various hospitals looking for answers, the medical community had made headway but it was still paltry. They were finally tested genetically and we discovered the PRSS1 gene. At that point, the pieces of the puzzle began to fall into place.

When becoming symptomatic at such a young age, there wasn’t really a “before diagnosis”. It’s a new normal that children with chronic disease somehow find a way to adapt, the before and after kind of blend into one narrative and a reality that we adapted to. Moishy echoes similar sentiments. Unfortunately, the plethora of support, research, and support that children with illnesses have access too didn’t exist really when I was diagnosed. We hardly understood my own disease, how can we expect the school, community, and friends to understand and support.

We all know that diet plays a big role in CP, so low fat became a thing. It definitely is not easy for children to restrict food intake when among friends and family events. Food=pain turns into quiet a negative association with food. I was small in stature and thin and frail. Moishy too experiences challenges in terms of growth. Malabsorption is inevitable. I am grateful that PERT exists. I definitely refrained from sports activities that I was afraid will hurt my abdomen. Our schooling was affected, with so much hospitalization. 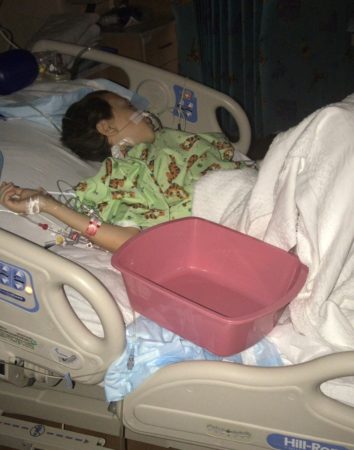 Moishy at his whipple surgery

Between ages 10-16,  I experienced repetitive attacks every few months. It was a cycle of ERCP’s and stenting to keep my strictured and obstructed ducts open. Moishy’s case followed a similar pattern. At age 16 my episodes became just days apart. It became clear I needed more aggressive intervention. My pancreatitis still had no known cause and we were still clueless as to the bigger picture of HCP. Moishy were not symptomatic at that point. The procedure that was offered me was the Pancreajejunostomy (Puestow procedure). The pancreas is sliced in half lengthwise think like a fillet fish, the jejunum was divided with one half attached to the pancreas. This procedure solves the problem of the strictured ducts. This was the solution offered and we took it for lack of anything better. At age 10 Moishy was very sick with a tumor in the head of his pancreas. It was benign but his markers showed a lot of potential of becoming malignant. He also had the Whipple 2 years ago with Dr. Beth Schrope at Columbia Presbyterian NY. The Puestow certainly stabilized me and I walked away thinking I was cured. In hindsight, I was never really okay and experienced daily mal-digestion and pain but I chalked it up to issues like “IBS”, gluten or lactose intolerance. In terms of growth and weight I never really thrived, I just survived. To date, Moishy is 2 years post Whipple. He is faring so much better and has not had any hospitalization since his operation. He is reliant on PERT but he still has endocrine function. In 2017 I started to decline again, the Puestow was failing, and my ducts were once again stictured, and the MRCP imaging was disappointing. My pancreas was atrophied, shrunken, and very diseased. In February 2019 age 29 I underwent the TPAIT with Dr. Schrope. To date, I am 1 year and 2 months out.

My advice to patients and parents of children with hereditary pancreatitis is to look at the broader picture and prognosis when it comes to choosing treatment. The reality is that HCP is a progressive disease that is not reversible. There is no cure and no exit strategy. I can’t stress enough how important it is to look at the future before choosing the Whipple or the Puestow. The Puestow directly affected my islet transplant. The quantity and quality of my yield were very low and so far, I have zero peptide activity. Parents, I implore you, do not let HCP steal your child’s childhood. Chances are high they will need to have their pancreas removed at some point. Don’t wait for their islet yield to be diminished. Do not let their childhood be one of pain and hospitalizations. Ask your team for an honest long-term prognosis, utilize the research, education, and support that we are so blessed to have now. I had none of that as a child. Had I known the bigger picture I would have certainly chosen the TPAIT instead of the Puestow. Admittedly I am disappointed my parents chose the Whipple for Moishy vs the TPAIT. They were scared, intimidated, and overwhelmed and I think they made a mistake. He will need his pancreas removed at some point and his islet yield will be affected. 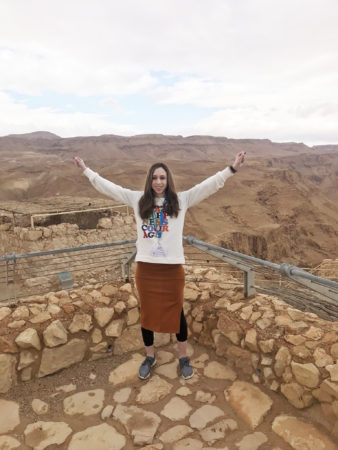 One year post-TPIAT at the Masada Desert (Isreal)

The TPAIT is a brutal surgery with a rough recovery that doctors claim to take at least a year. I’m not sure there is another surgery that entails so many life-altering sacrifices. Diabetes type 3c is difficult to control. Fully exocrine insufficiency means full reliance on enzymes and digestion is altered so tummy pain, gas, nausea is here to stay. I experienced nutritional difficulties and had to be readmitted for a feeding tube eight weeks post-op. it was the hardest and best decision. Recovery is full of ups and downs. It takes a long time for the damaged nerves to regenerate, so the pancreas phantom pain is normal in the beginning. But ever so slowly I started seeing the results pay off. I am no longer afraid of unpredictable attacks, I am eating well and best of all I can be a Mom to my two little girls. I started college and most significant I joined the National Pancreas Foundation (NPF) to become the chapter chair of the Downstate New York Chapter. I hope I can turn our story into a narrative that can yield positivity, hope, and support for patients and caregivers.

When Moishy were diagnosed, my illness became crystal clear. It was a new era and I eagerly attacked the research and education that was now so accessible. I found the NPF and formed many connections with some of the leading centers and specialists. Education is power, support is key. As a child I formed coping mechanisms purely to survive, as an adult, I tapped into the support we now have access to and it made a huge difference.

In the orthodox Jewish community, genetic illnesses are stigmatized. Things are slowly changing and we are making progress but there is work to be done. I believe people with genetic illnesses might feel as though there is inherently something wrong with them. My illness wasn’t a “secret” as a child but it wasn’t spoken about it either. I hope to use the platform of Chapter Chair as a tool to bring more awareness to chronic diseases.