Pushing Boundaries: My Journey to Defy the Odds – Amanda’s Story

On July 2, 2019, I got the best news of my life: I was approved for a Total Pancreatectomy with Islet Autotransplantation (TPAIT) at the University of Cincinnati with Dr. Syed Ahmad on September 3, 2019. When you live life with a chronic disease that has altered the way you interact with the world you take any chance you can get to return to the life you once knew.

When It All Began

It was a typical morning for my family. My husband was at work, which was a shed converted to an office in our backyard. My oldest daughter who was 4 at the time and I were working on a puzzle in her bedroom and my youngest, age 1, was taking her morning nap. Suddenly, I started to have strong pain in my stomach, abdominal bloating, and vomiting. This went on for about 2 hours before it started to settle enough that I could leave my bathroom. By afternoon I felt fine and went about our afternoon preparing the garden to be planted and general yard clean-up.  It was almost Mother’s Day (2016) and we had great plans for our garden and orchard this year. I shrugged it off to some sort of virus and thought nothing more of it. 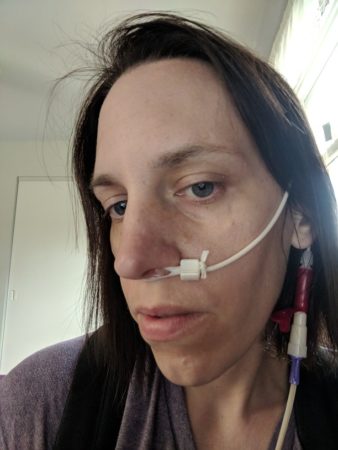 Then it happened again two weeks later. I still brushed it and figured the virus just hadn’t really resolved. It wasn’t long after that it happened again, and would continue to happen more frequently, get stronger and last longer with each attack. I chalked it up to my obesity, poor food choices, and stress. I didn’t see a GI until March 2017 because I was so embarrassed about my weight. When I spoke with the GI she was baffled. She spoke to another colleague and they decided they would do a large work-up because it didn’t sound like anything they had worked with before.

That same exact night I went to work and came home to bed as normal. I remember I was dreaming I was in severe pain. I woke up – and I was. I remember thinking to myself, “Ok here we go again. Now these things are going to start at night too!” Only this time it was different. It was as if someone had thrown a switch in my body that unleashed the most excruciating pain of my life. I am no stranger to pain, in addition to playing roller-derby, I had given unmedicated childbirth to both my girls, one of which at home.

I started sweating profusely and the pain was so crushing in my chest I started screaming out to my husband.  I was convinced I was going to die of a heart attack on my bathroom floor while my now 2 year-old kept crying, “Mommy, you ok?”. The paramedics arrived and I was rushed to the closest hospital. I’d like to say that they knew right away what was wrong, but instead, I was treated so poorly, as if I had overdosed or was over-reacting. That was until my lab results came back. Suddenly the whole mood in the room shifted: “You have pancreatitis, and you could die.”

This would continue to happen anywhere from every 2 – 6 weeks throughout 2017, resulting in sometimes week-long hospital stays. I lost official count but I believe I had 10 hospitalizations for Idiopathic Recurrent Acute Pancreatitis (IRAP) and had gone through every test in the book to determine why. Labs, EGD, colonoscopy, many CTs, EUS, MRCP, MRCP with secretin and contrast.  There was one test I was pushing hard for – a ERCP with Sphincterotomy as I started researching my symptoms and risk factors for varying illnesses associated with acute pancreatitis. Reading the description of sphincter of Oddi dysfunction (SOD) hit home for me. After my third hospitalization, the GI that was rounding brought it up as a definite possibility. Then I saw an Integrative Medical Doctor who agreed.

Being Your Own Advocate and Finding the Right Physician

The first two specialists I worked with would not allow me to have the test, nor see the specialist that actually performed the procedure. There’s some conflicting research out there on the efficacy of the procedure and I was in the highest risk group for the procedure. I was told I had a 30% risk of multiple organ failure or death. But it was a risk I was willing to take. I had gone from an active parent doing daily trips to parks, playdates with friends and girls nights out, to a mother so fearful something would happen to her children should I have another attack away from home. I became depressed and isolated. By December of 2017, just 9 months from my first documented attack I had lost around 75 pounds.

I started researching hospitals and providers that would be more likely to support my choice for an ERCP. I decided the trip to Indianapolis at Indiana University to see Dr. Jeffrey Easler was worth it. And I was right. I was finally met with compassion, validation, and understanding. He and his nurse, Sally, listened – they cared and they felt they could help me. I was booked for an ERCP with sphincterotomy on January 3, 2018. I had a 4-day hospital stay due to my pancreas reacting to the procedure, but my other organs were fine and I was alive! The efficacy of the procedure isn’t terribly high but we were all optimistic that this was the answer. I have not had an acute attack since.

Current Status, Advice for Other Patients, and Future Plans

I wish this is where I say my life started getting better. Where it had turned around. And for the most part, it did. The fear of going out with my children has lessened, but it’s still always in the back of my mind. The sphincterotomy is not a life-long cure, and the acute attacks could come back at any time. But as time passed I was more confident I was going to have a long stretch. But what started to happen next is what caught me off guard.

Just 3 weeks after that procedure I started having frequent nausea and vomiting. Enough so that we started trying meds to control it. Over the next few months it would get so severe I eventually needed a feeding tube to stop weight loss and malnourishment. It was at this time I met June and Rod Strayer, who came and visited me post op and brought me some supplies (various NPF supplies, AMT clamps, Cavilon barrier) that would help make my life easier with a feeding tube. June, in turn, introduced me to the National Pancreas Foundation, an organization I am now involved with as well. 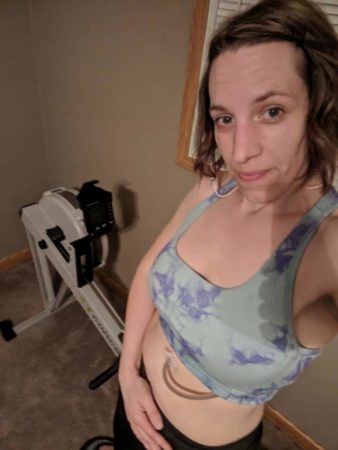 Once I had a PEGJ feeding tube I felt my life was coming back. I started indoor rowing, competing in sports with my dog Maple, and attending regular activities with my children. I had a few good months, and convinced the tube had done it’s job of resting my pancreas, insisted my provider pull it (against his better judgment). Not even a week later the constant nausea and vomiting had come back. I was unable to keep much of anything down for weeks, and I underwent a second surgery to place a PEGJ.

I was doing quite well going into 2019. I had started becoming more competitive in my rowing, and knew it was so helpful in both the health of my body and mind. I was determined to compete in indoor worlds by 2020. I started my Facebook page, The Rowing Pancreas, to document my journey as a fighter of RAP and CP while working towards my goal of being an accomplished indoor rower. During this time I worked through a lot of emotional demons. I had spent the last 3 years blaming myself for this disease. I kept thinking I should have done things differently. I could have eaten better and exercised more. If I had done those things I wouldn’t be where I was. At no time had a doctor said these things, but it was this constant guilt that held me back in accepting my illness. I had a genetic panel done, which revealed so many genetic components associated with pancreatitis that even my care providers were surprised. It was at this time I was able to forgive myself and move on.

I continued to row and started Pure Barre as well. These two activities were so beneficial to both my physical and mental health.  Then the nausea and vomiting started to worsen and a new symptom was now involved: pain. I had it here in there daily, but it was always manageable without medication. Usually never more than a 2 or 3 on the pain scale and it was short lived. The pain started getting stronger and lasting through most of my day. I was now on prescription pain meds and still having pain. I was getting more depressed, not able to row because I was either in too much pain or too tired from medication. Fearing I would become addicted I requested a celiac plexus block for pain – though it was not effective. I started having difficulties with my tubes flipping and coiling and would need many replaced over just a few months time. I was giving up.

I wasn’t a lively friend, or the patient mother anymore. We missed playdates and activities. I became easily irritated and frustrated with daily tasks. There are times I have to tell my children not to touch me because I hurt, or not to wiggle because it made me sick to my stomach. The bright, confident and compassionate person I had been most my life was lost. 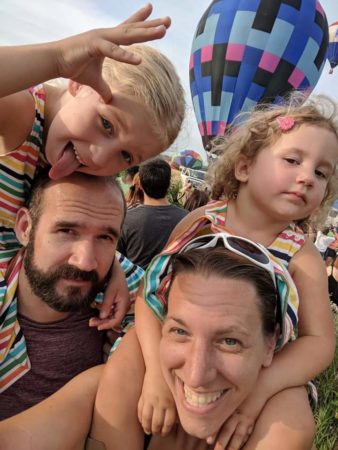 After much thought, research, and a lot of therapy,  I decided to consult for the TPAIT. It was the one hope I had of getting my life back. Just like my gut told me the ERCP was needed 18 months ago, I knew this was what I needed. There’s something to be said for intuition. My hope is to once again enjoy activities with my family, share meals with friends and get back to rowing and barre work.

What I have learned through all of this is that you can’t do it alone, and you can’t do it blindly. Find a therapist that is educated in managing patients with chronic disease. They will be invaluable. Lean on your loved ones for help and support. Next, learn everything you can about your illness. Many doctors are amazing, but if there’s one thing I’ve come to know it is that this disease is so poorly understood, and the research is so limited, that even the medical community can’t decide the best course of care. At some point in your journey, you will need to advocate for your care.  Lastly is to get involved. Find an organization, such as the NPF, that will advocate on a global level for better research, continuity in the standard of care and someday a cure.