Ashley was a 29-year-old school teacher when I first met her. She reported that when she was young, she was bothered by recurrent “stomach aches” that were sometimes bad enough to prevent her from going to school. Her pediatrician couldn’t find a cause of these episodes but didn’t think this represented a “school phobia,” as Ashley was a good student who enjoyed school and sports. Her attacks of abdominal pain continued during her high school years, and in college she was hospitalized with a severe episode that was diagnosed as acute pancreatitis. She had no apparent risk factors for pancreatitis, as she didn’t smoke or drink much alcohol and had no family history of pancreatic disease. Her pancreatitis was therefore considered “idiopathic” meaning that no cause was apparent. She followed a careful diet, avoiding alcohol, fatty foods, and red meat, but her attacks continued unpredictably. When her pain episodes began to interfere with her job teaching school, she sought help at centers that had expertise in pancreatic disease and had been seen by specialists at multiple pancreas centers over the preceding 5 years before coming to our clinic.

Her imaging studies revealed that she had a condition called Pancreas Divisum. This refers to a condition where the pancreas, which forms as two separate glandular buds in the early development of the embryo, fails to fuse completely (Figure 1). 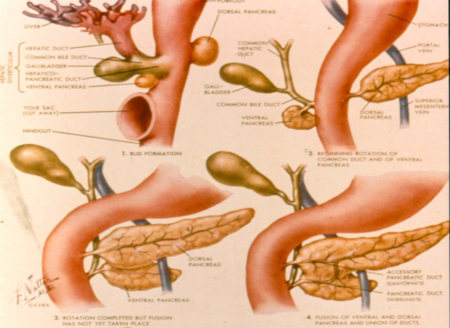 Figure 1. The embryology of the pancreas. The pancreas is initially formed in an embryo as two separate buds which form the elements of the ventral and dorsal pancreas. At about 5 weeks of embryonic development, the two buds join together as the upper intestine rotates. Normally the ductal systems of the ventral pancreas (which forms the posterior head and uncinate process) and the dorsal pancreas (which forms the body and tail) fuse together. 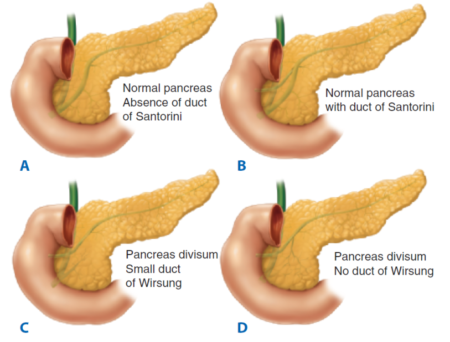 Figure 2. Variations on the ductal anatomy of the pancreas. Complete pancreas divisum (figures C and D) occurs in about 8% of all persons. The duct of Santorini drains into the duodenum through the minor papilla and the duct of Wirsung drains through the Ampulla of Vater together with the common bile duct. (from Schwartz’s Principles of Surgery, 11th Ed. McGraw-Hill Publishers).

The duct of Santorini enters the duodenum via an accessory opening called the lesser or minor papilla, a smaller opening than the main Ampulla of Vater which drains the common bile duct and the main pancreatic duct into the duodenum. It is thought that the small minor papilla is insufficient in some patients to allow complete drainage of the body and tail of the pancreas, and this backup or partial obstruction creates increased pressure within the duct that can provoke episodes of inflammation. Pancreas divisum occurs as a common anatomic variant in roughly 8-10% of all persons. Although most people with pancreas divisum never have symptoms of pancreatic disease some patients with pancreas divisum suffer recurrent pancreatitis. It has been a continuing debate among pancreatic specialists whether or what kind of intervention is appropriate to treat the condition.

Ashley had undergone multiple ERCPs in which small plastic tubes or stents had been placed through her minor papilla to improve the drainage of her duct of Santorini. Her symptoms usually responded to the placement of the stent, but recurred when it had to be removed. Eventually, she developed a dilatation, or widening, of the duct in the body and tail of her pancreas, which meant that there was a narrowing or stricture of the duct near its emergence through the minor papilla. It was not clear whether the stricture was caused by the episodes of pancreatitis, or whether it was the result of scar tissue developing due to irritation of the tissue caused by the stent. But either way, the dilated duct meant that a blockage existed and this was the likely cause for her continued pain (Figure 3).

Figure 3. ERCP showing dilatation of the dorsal duct in a patient with pancreas divisum. The minor papilla has been cannulated with the thin tube, and the image indicates a blockage at the level of the minor papilla. The width of the duct is half the diameter of the 11 mm endoscope and is twice the normal diameter of the duct. (Courtesy of Dr. Gregory Cote’, Division of Gastroenterology, Oregon Health and Science University)

With recurring pain requiring daily low-dose narcotics, and a dilated pancreatic duct, Ashley was a candidate for some form of decompressive operation, and everyone agreed it was time to move to surgical treatment. I explained the Frey procedure, which would drain the duct in the body and tail of the gland and would remove the chronic scarring in the head of the gland, and after many thoughtful questions, she agreed to undergo the surgery. The procedure went perfectly and I was very pleased with the result. She recovered quickly, was home in 6 days, and seemed to do well for months afterward.

It was found that many patients with symptomatic pancreas divisum also harbored a mutation in the cystic fibrosis transmembrane conductance regulator (CFTR) gene, and this suggested that although pancreas divisum alone might not cause recurrent pancreatitis, the additional presence of a CFTR mutation might constitute a “double hit” which predisposed the pancreas to recurrent inflammation. Ashley had just such a mutation, which explained her failure to respond well to the Frey procedure.

Ashley was evaluated at the University of Minnesota, where the largest number of TP-IAT procedures have been performed and underwent a successful procedure there. She recovered from the operation, and despite needing small doses of insulin every day for her diabetes and continuous pancreatic enzyme supplements, she was able to return to teaching school, and is now happily married and doing well. 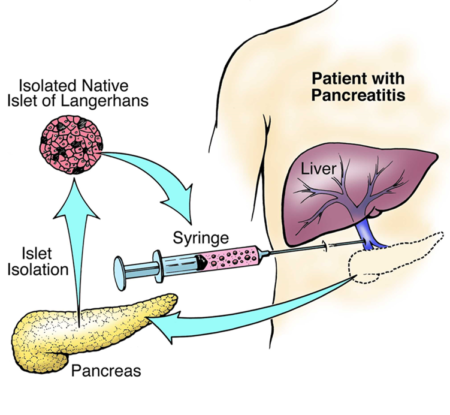 Figure 4. Total Pancreatectomy with Islet Autotransplantation (TP-IAT). The entire pancreas is removed and the hormone-containing islets are immediately isolated and then administered back into the patient to preserve endocrine function.

The Value of Genetic Testing

The use of genetic testing in patients with recurrent or chronic pancreatitis has been a major advance – a true game-changer. There are now several known genetic mutations that cause what we call hereditary pancreatitis. The first was discovered in 1996 by David Whitcomb at the University of Pittsburgh, and it was found that patients with hereditary pancreatitis due to a mutation in a gene called PRSS1 have a progressive disease that begins in childhood or adolescence and results in chronic pain, progressive loss of pancreatic function, and a significantly increased risk for the development of pancreatic cancer in the 5th or 6th decade of life. There have now been several gene mutations which have been associated with recurrent or chronic pancreatitis, and CFTR mutations are among the most common.

Cystic Fibrosis, originally termed Cystic Fibrosis of the Pancreas, is a disease which causes severe lung disease and until recently was considered incurable. With the discovery of the CFTR gene by Francis Collins and colleagues in 1989, and the subsequent discovery of multiple mutations of the gene, treatment for pulmonary cystic fibrosis is now a reality. But a subset of patients have a CFTR mutation which primarily affects the pancreas more than the lungs. Patients with pancreas divisum and recurrent pancreatitis were found to be predominantly female and to frequently harbor a CFTR mutation which prevents the pancreatic duct cells from secreting chloride ions and water normally, and this results in an obstructed ductal system filed with mucus. The result is recurrent attacks of acute pancreatitis or a smoldering chronic inflammatory state that affects the entire gland.

The Role of Radical Surgery

Until specific drugs are developed and proven to reverse the effects of the various mutations associated with recurrent and chronic pancreatitis, doctors and patients are left in an uncomfortable situation where repeated stenting of the pancreatic duct and decompressive operations are unlikely to result in permanent relief of symptoms. The TP-IAT procedure offers relief from the pain of recurrent and chronic pancreatitis – more than 90% of patients report their pain is resolved and they are free of narcotics – but it is an operation which trades one chronic problem for the metabolic consequences of total pancreatectomy. Although 30-40% of adult patients do not require insulin after TP-IAT, most require a small dose to maintain good control of blood sugar levels. And all patients who undergo TP-IAT must take pancreatic enzymes with each meal for the rest of their lives. Reluctance to consider the procedure has been dispelled somewhat by the discovery that children who have undergone TP-IAT in the treatment of hereditary pancreatitis have done astonishingly well after the procedure. More than 90% of children under the age of 12 are pain-free, most don’t require insulin after TP-IAT, and almost all have resumed a normal life course. In addition to providing relief from chronic pain this radical approach is preventing the occurrence of pancreatic cancer in these patients. Research is ongoing to refine and standardize the indications and methods of TP-IAT so that patients with debilitating pancreatic conditions, or those who are destined to develop pre-malignant changes, can benefit. There are now 16 centers around the country that offer TP-IAT to carefully selected candidates, and it is increasingly chosen as the only permanent relief of the debilitating symptoms of hereditary chronic pancreatitis.

A study to determine whether stenting of the minor papilla is effective in relieving symptoms of recurrent pancreatitis in patients with pancreas divisum is the Sphincterotomy for Acute Recurrent Pancreatitis (SHARP) Trial, available at www.pancreasdivisum.com.

A listing of NPF Pancreatitis Centers of Excellence, many of which offer TP-IAT, is available at  https://pancreasfoundation.org/npf-centers-info/pancreatitis-centers/.