A scientific advance makes an operation obsolete – The story of Betty

A dream of science is to discover medicines which make surgical operations unnecessary. Drugs which reverse genetic defects or medicines which cure malignancy have evolved from science fiction to reality for many diseases. But not so for most pancreatic diseases. There is still no approved drug to treat pancreatitis, and the search for drugs or drug combinations that can halt pancreatic cancer is an unfulfilled goal. Progress comes slowly in the quest for medical treatments that can eliminate the need for pancreatic surgery, but one recent advance has made this possible for a rare surgical indication.

Betty was a 47 year old woman who had struggled with being overweight all of her adult life. After failing to maintain weight loss with multiple diets she was 5 feet 6 inches tall and weighed 280 pounds, giving her a Body Mass Index (BMI) of 46, well within the category of “morbid obesity.” She decided to undergo Roux-en-Y gastric bypass, a form of bariatric or weight-loss surgery because she had already developed type 2 diabetes, and she knew that she was at increased risk for cardiovascular disease and a shortened life span. Her primary care provider encouraged her and her family was supportive, and so Betty underwent the operation.

Her surgery went well, and Betty recovered from the operation quickly. Her diabetes promptly resolved and over the next 15 months she lost over 100 pounds and felt better than she had felt in years. About 2 years after the surgery, however, she began to experience episodes of dizziness or lightheadedness. These would occur in the early morning or in midday and she noticed that if she ate something they seemed to resolve. But the episodes worsened, and one day as she was driving to work she suddenly lost consciousness and drove off the road. When she was taken to the local emergency room, her blood glucose was found to be in the 30s. She was given intravenous glucose and quickly regained consciousness, but the event frightened her and alarmed her primary care provider. She was started on a very low carbohydrate diet but her dizziness and feeling that she was about to pass out continued. She was started on diazoxide, a medicine which suppressed her insulin secretion, but found its side effects of water retention and weight gain intolerable. She was then referred to our center for further evaluation.

As the number of patients undergoing Roux-en-Y gastric bypass surgery increased dramatically through the 1980s and 1990s, so did the number of reports of patients experiencing severe hypoglycemia, or low blood glucose, typically developing 2 to 3 years after the operation. Some patients responded to carbohydrate-restricted diets, but many did not. The problem was found to be an exaggerated and inappropriate insulin response after a meal which failed to correct with diet or medications. Reports began to appear of patients who had undergone resection of most or all of their pancreas as a way of preventing excessive insulin secretion. This was clearly a last resort option but seemed indicated by life-threatening episodes of hypoglycemia in some patients.

When we first saw Betty, we performed a number of studies on her. We measured her insulin levels and the levels of two hormones produced by the intestine called glucose-dependent insulinotropic peptide, or GIP, and Glucagon-like peptide 1, or GLP-1. GIP and GLP-1 are hormones that are normally secreted by the intestine after a meal, and normally serve to augment the release of insulin. They facilitate the insulin response to feeding, and do not cause insulin release when blood glucose levels are normal. After an oral glucose challenge, Betty’s insulin levels spiked to three times their normal level, as did her levels of GIP and GLP-1. We started her on a trial of octreotide, a form of the hormone somatostatin which inhibits most peptide hormone responses, but Betty’s insulin levels still spiked even though her GIP and GLP-1 levels were lower.

I recommended that Betty consider having a reversal of her Roux-en-Y gastric bypass. That’s not an easy operation to perform but seemed to be the best way to return her gut hormones and insulin levels to normal. But Betty was adamant that she didn’t want to regain all the weight she had lost and refused to consider reversing her gastric bypass. That left as the only option an operation to remove most of her pancreas in order to eliminate most of her insulin-producing cells in the pancreas. She readily agreed, and so I performed an extended distal pancreatectomy (Figure 1), removing about 80% of her otherwise completely normal-appearing pancreas. 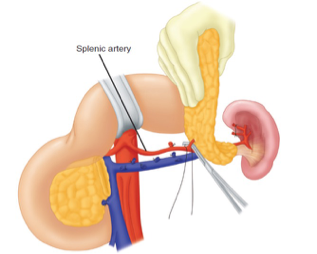 Figure 1. A distal pancreatectomy with removal of 50% of the pancreas and preservation of the spleen is shown. The operation can be performed either laparoscopically or with open technique. The spleen is preserved to prevent certain infections. (From Schwartz’s Principles of Surgery, 11th Edition, McGraw-Hill 2019, with permission)

She recovered from her surgery uneventfully and had much-reduced insulin levels when we tested her again after the operation. Her glucose levels were now somewhat elevated, but she was asymptomatic from hypoglycemia for the first time in over two years and was very pleased with the result. Her GIP and GLP-1 levels were still very high, but her surgery left her with far fewer insulin-producing beta cells. About a year after her pancreatic operation, however, she began to notice occasional episodes of dizziness which cleared with orange juice or food, and it seemed evident that her pancreas was again producing more insulin than it should have. GLP-1 stimulates the growth of pancreatic beta cells and the constant bombardment of the gland by her high GLP-1 levels was driving a return of the problem. She again refused reversal of her gastric bypass and kept to a very low carbohydrate diet and an ample supply of candy bars and orange juice to prevent severe episodes of hypoglycemia.

How Advances in Science Make Some Operations Obsolete

Peptic ulcer disease was a major cause of illness and death before the introduction in the 1970s of cimetidine, a drug that blocks the release of stomach acid. Until that discovery, surgery for peptic ulcer disease was widely practiced and partial or subtotal gastrectomy was performed on many patients with persistent ulcer disease. After the discovery of cimetidine, and the discovery of the bacterium Helicobacter pylori that causes ulcers, the need for peptic ulcer surgery virtually disappeared. Gastric acid could be blocked with cimetidine and its newer chemical cousins, and H. pylori could be irradicated with a combination of antibiotics. During the era when gastric surgery was widely practiced, however, it was noticed that up to 10% of patients experienced episodes of hypoglycemia after stomach resection. This condition was treated with very low carbohydrate diets with variable success. The drug discoveries made peptic ulcer surgery essentially obsolete, and the problem of post-gastric surgery hypoglycemia was largely forgotten.

With the dramatic increase in bariatric surgery, particularly Roux-en-Y gastric bypass which partitions most of the stomach from contact with food, the problem of hypoglycemia after gastric bypass resurfaced. Multiple investigators found that the gut hormones GIP and GLP-1 were in some cases dramatically elevated after gastric bypass, and this, together with the progressive weight loss, was largely responsible for the resolution or cure of diabetes which frequently accompanied the massive obesity. When high levels of these hormones were found to be the culprit in the hypoglycemia that occurred in some patients, there was no practical way to reduce these hormone levels to their normal pattern, short of reversing the bypass, other than to eliminate the starch and sugars in the diet that especially stimulated their release.

The Roux-en-Y gastric bypass has been used for decades and is one of the most durable and effective surgical weight loss procedures. It is much more effective than the adjustable gastric band, which has largely been abandoned but has been increasingly replaced by a simpler operation called the Gastric Sleeve (Figure 2). 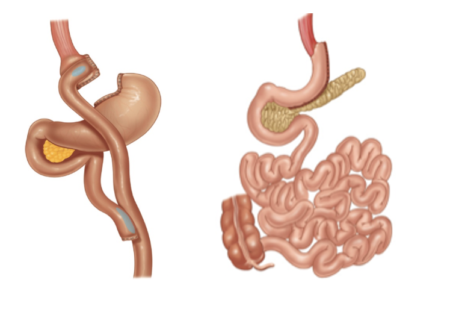 Figure 2. Left Panel Roux-en-Y gastric bypass with creation of a small gastric pouch and diversion of the nutrient stream to the mid-small intestine. Right Panel The Gastric Sleeve procedure with reduction in the stomach size to a narrow conduit or sleeve but preservation of the normal course of the nutrient stream. (From Schwartz’s Principles of Surgery, 11th Edition, McGraw-Hill, 2019 with permission)

As the figure shows, the Roux-en-Y gastric bypass prevents the meal from entering the lower stomach and duodenum and allows it to enter the small intestine further down-stream. This seems to be the cause of the exaggerated GIP and GLP-1 secretion. The Gastric Sleeve doesn’t divert the meal stream from the upper small intestine, and hypoglycemia after this operation is very rare.

Studies in peptide chemistry revealed that both GIP and GLP-1 act on their cellular targets by binding to specific receptors on the surface of these targeted cells. It was also discovered that a separate but similar peptide hormone called exendin, produced by an amphibian, also bound to these receptors and activated the target cells. Then it was found that a shortened version of exendin, called exendin 9-39, would bind to these receptors and block them from being activated by the native hormone. Investigators isolated this receptor blocker and tested it in patients with hypoglycemia due to gastric bypass and found that it prevented the hypoglycemia and relieved the symptoms in most patients1. The peptide has now been produced commercially and is called Avexitide2. It is undergoing full clinical studies in anticipation of being proposed for approval by the Food and Drug Administration for use in patients with hypoglycemia after gastric bypass.

Just as the discovery of cimetidine helped to make peptic ulcer surgery obsolete, the discovery of exendin 9-39 will help to make the removal of the pancreas obsolete in patients with hypoglycemia due to gastric bypass. I regret that my surgery on Betty took place several years before exendin 9-39 was shown to be effective. But this is the natural history of our evolution of the treatment of disease when basic scientific discoveries allow us to shift from surgical treatment to medical treatment. This evolution is inevitable if we continue to invest in research and one wishes it could occur at a faster pace. This need for progress is especially true for the diseases of pancreatitis and pancreatic cancer, but if history is any guide we will see this evolution one day for pancreatic disease as well.