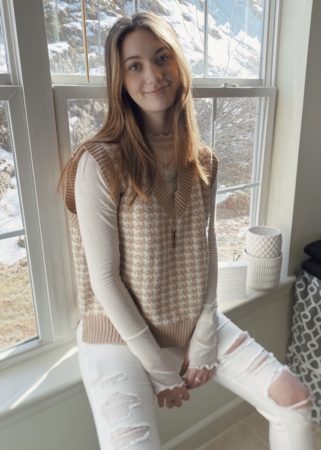 Hi! My name is Cece Tower and I am from Cabin John, Maryland. I was diagnosed with pediatric pancreatitis when I was a little girl and recently had a Total Pancreatectomy with Islet Auto Transplantation (TPIAT). I am currently in college and my dream is to become a pediatric nurse practitioner so I can help kids struggling with illnesses. I hope through sharing my story, others know they are not alone.

How old were you when you first had your first bout of pancreatitis? I was 8 years old when I was first hospitalized for an episode of pancreatitis but we believe I began having episodes at around age 2 or 3.

What did you think it was initially? My pediatrician at the time told my mom that my stomach pain was likely from anxiety or possibly constipation and had me take Pepto Bismol as needed. 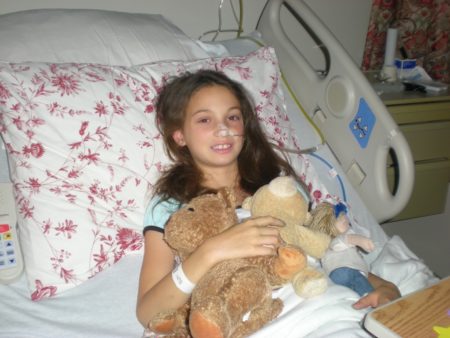 Cece, 8 years old in the ICU at Georgetown University Hospital. Her first hospitalized episode of pancreatitis and when she was initially diagnosed.

How often were your hospital stays? I was in and out of the hospital a lot throughout childhood and did have a Picc-Line for one summer. When I was in middle school things began to look up and at one point, I was told I would never have an episode again. But, then just as I started my first month of high school I had an attack and ended up in the hospital for a week. I didn’t know the firestorm that lay ahead for me. After that attack, I had an episode every other month of my Freshman year. By the end of high school, I had endured around 20 hospitalized attacks among other chronic attacks.

Can you tell us what your life was like before pancreatitis? I honestly don’t remember what my life was like before pancreatitis because I was diagnosed at such a young age. I do remember that I tried my very hardest as a kid to stay active and make friends. I was an avid dancer from the time I was 5 until age 12 and I remember going straight from the hospital to the auditorium for dance recitals which is still one of my fondest memories from growing up. I have always had a very supportive family. They never told me I couldn’t do something because of pancreatitis and that is such a gift. 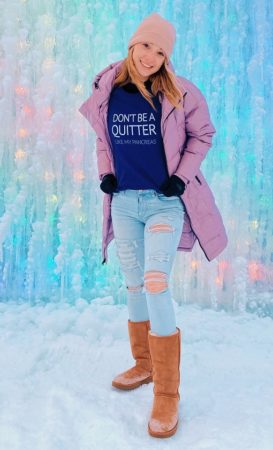 What was your life like living with pancreatitis attacks? What did you have to do differently to work around this illness?  I developed a good amount of undiagnosed anxiety and depression as I began to have more and more attacks. It was very, very difficult in high school to maintain friendships and have a good work ethic because I was constantly torn away from social activities and being present in the classroom.

I had a hard time finding friends who could fully understand the magnitude of pancreatitis and how it is not like you just have a stomach ache that goes away. Having a normal social life was very difficult because of this and because I was in and out of the hospital so often. I often missed special events, like dances, basketball games, holidays, and found it really hard to step back into the rhythm of classes and friendships after having been in the hospital. When I was in the hospital with pancreatitis, I had to be on lots of heavy pain medication and fluids until my pancreas calmed down, and then when I would get discharged, I would still be sore from the attack. Yet, I would go back to school and try so hard to pretend like everything was okay. Many people never even knew anything was wrong because I looked healthy on the outside. I have one very compassionate friend who has always completely understood what I was going through and tried her hardest to make sure I knew that she was there for me and that got me through so many hard times.

In school, I felt like I could not live up to my full potential because, as a person with ADHD, on a normal day school was difficult for me. Then to add to that, I often had to learn most of the material on my own, because the class had moved on. I always pushed myself to take AP classes and advanced science courses to remain a competitive student, but it became absolutely exhausting. I distinctly remember an occasion where I was having a panic attack at school because I had to miss an exam earlier in the month from a previous episode and the teacher had slammed the classroom door in my face and said I could not take the test anymore. Immediately after that, I had a panic attack and not even an hour later I called home from school because I was having a pancreatitis attack. The summer before I entered college, I had a stent placed and some pancreatic stones removed. I came to college hoping that the stent would buy me some more time before needing the TPIAT surgery. Unfortunately, it did not help and I ended up having back-to-back episodes in my very first semester at college. 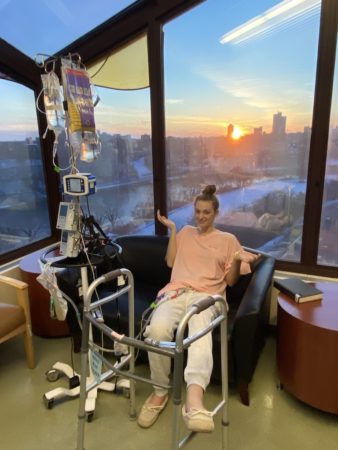 One week post-TPIAT surgery in February of 2020 at the University of Minnesota.

What was the main factor in the TPIAT surgery? Had you ever had surgery before? I had never had surgery prior to the TPIAT surgery which made it extremely daunting. A surgery involving your entire G.I. system being reconstructed and becoming instantly diabetic is terrifying let alone it being your first surgery. The main factor in my decision to have the TPIAT surgery was that I did not believe my body could endure another four years of attacks before getting the surgery. I really wanted to wait to graduate college before having the surgery but I could not bear to put myself through at least 20 more episodes. Because I have genetic pancreatitis it was not going to go away on its own and I had to realize that even though doctors had in the past given me hope it could go away on its own, it never was going to. In addition, I wanted to have a chance at a more normal and predictable life. I never had a day where I didn’t worry that at any moment I would need to go to the hospital.

What was your recovery like? I don’t believe any recovery from TPIAT is easy. I had a relatively smooth recovery with a few complications here and there but fortunately nothing major. I remember being in a lot of pain for a while but I tried to go for short walks. Then once I got home I tried biking (of course after getting the okay from my doctors). I had a second surgery to revise my incision from my feeding tube and the surgery in general. I also developed kidney stones and a severe kidney infection during my recovery. It took a long time to recover but I am now a year post TPIAT and am doing very well. I developed a lot of anxiety and depression because I had my TPIAT a month before we went into complete lockdown from the COVID-19 pandemic. I felt absolutely terrified and incredibly lonely just like everyone else only I had just had major surgery. What truly got me out of a bad state of depression was going horseback riding. I have been an avid equestrian for several years and had I not been able to safely escape from the crazy pandemic I think my recovery would not have been as smooth as it was.

Any illness will take a toll on you mentally and physically. For kids that are living with pancreatitis as well, what advice would you tell them to help them get through this?  There is nothing I can stress more to kids living with pancreatitis than this: having an invisible illness does not in any way discount the amount of trauma you endure. Don’t be afraid to talk about your emotions and the toll this illness takes on you. I truly wish I had opened up more to my friends and family sooner than I did because I am only just beginning to realize the mental toll pancreatitis had on not only me but my entire family. I also would like to emphasize that as alone as you may feel, there really is an incredible community of those struggling with pancreatitis. You are not alone. I used to think that because everyone would call me strong and fearless that it meant I couldn’t be scared. In reality, being strong and fearless means that you do feel fear. But when you feel fear, you keep going anyway. There is no good time to have an episode. There is no ‘right’ time to have the TPIAT surgery. So, whenever your time is, that is your journey and your path.

For you personally, what has helped you the most during this ordeal? I really relied on my family and closest friends in this difficult time. I really tried to find positive outlets. At 3 months post-TPIAT I began horseback riding again and had I not been out at the barn riding as much as I could handle I don’t believe I would be in the place I am in right now. The horses had such incredible healing quality for me and they had always been there for me in the past after attacks so I knew that I could count on them and my barn community. I also have two dogs who are incredible companions and they are a wonderful distraction. 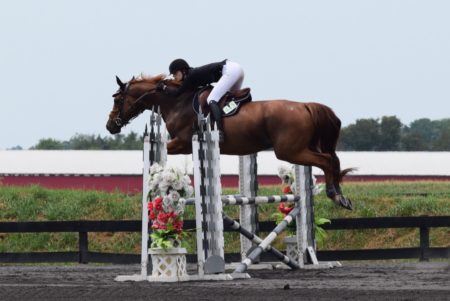 Jumping at a horse show with the jumps set to 1.0 meters on her horse Just Luck in August of 2019. Riding has been an incredible healing quality for Cece.

How are you feeling now? And how is your life now post-TPIAT? Over the past almost 12 years I have endured quite a bit of trauma. I have carried it for far too long and my TPIAT surgery definitely added to that. I never let myself sulk in the sadness of life with pancreatitis because I didn’t want to feel sorry for myself. But I realize now that if I had dealt with that trauma the second I noticed it I could have saved myself a lot of emotional pain. After my surgery, I really struggled with eating and I created a very unhealthy relationship with food. It took a lot of self-love and realizing that I do have self-worth to be the person I am today. I had a bit of a struggle in the summer/fall after my surgery. I developed 5 or more kidney stones and a kidney infection, I got Covid-19, and am now waiting to have surgery on a hernia. In no way was my recovery just a walk in the park. The hardest part is still figuring out how to manage diabetes. It is a shocking change that I don’t think I would have been ready for if I tried. I cannot thank the team at the University of Minnesota enough for all the support they have given me over the past year.  I now for the first time feel like I can have a positive, happy, and healthy future and I can plan for that future. My dream is to become a pediatric nurse practitioner so I can help kids struggling with illness.

How did you learn about the National Pancreas Foundation? I learned about the NPF through researching pancreatitis and looking for a community of other kids going through the same things I was. I recently became involved in their advocacy work and want to help bring more research funding to pancreatitis and awareness for this disease so there are better treatments.