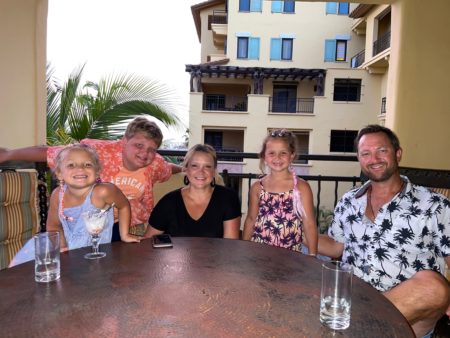 How old was Cesiley when she first had their first bout of pancreatitis?

Cesiley was 3 ½ when she first had any symptoms. We thought she just had a rotavirus that was going around her school because she was not able to keep anything down but she was unusually moaning in pain. We took her early the next morning to her pediatrician who ran bloodwork and when her lipase levels came back in the 8,000s, we were immediately sent to Dallas to the Emergency Room

Did the doctors know it was pancreatitis right away? If not, what did they think it was and how did you find a specialist that diagnosed her correctly?

We were admitted because her lipase levels were really high. They did an ultrasound and thought she had a tear in her pancreas caused by blunt force trauma. We did not know how she could have had any blunt force trauma and were shaking our heads. A few days later while still in the hospital, they did a sedated MRI and did not see the tear. They thought that maybe she was just so inflamed that it had looked like a tear on the ultrasound. After her lipase levels came down, she was able to keep down food again, and her pain was under control they sent us home and we followed up the next week with her Pediatric GI doctor. He said the blunt force trauma didn’t make sense wanted to do genetic testing on her. I feel so blessed that he did this so soon and that we were able to find out she has the gene mutation PRSS1. He is the person I am most thankful for on our journey thus far. 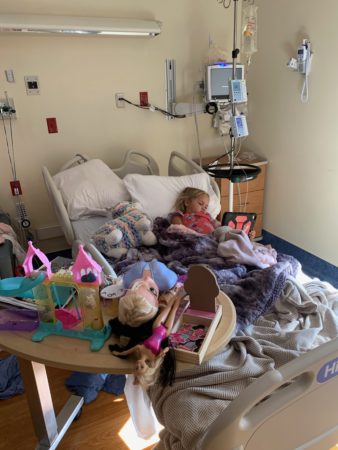 Cesiley during one of her hospital stays

However, I will never forget the day he told me what she had, I asked him what it was. He told me that this would be more of an annoyance in her life than anything, and from that moment forward I knew he did not fully understand what she had been diagnosed with. After that, we had a few months of driving to Dallas to get bloodwork twice a month along with ultrasounds and then rocked on through the summer till September. She woke up one night in the middle of the night throwing up, we tried Motrin and fluids, and she couldn’t keep anything down. This was during an outbreak of covid, and we called our doctor to try and let the ER in Dallas know we were on our way and our doctor told us that there were no hospital beds anywhere in the Dallas-Fort Worth area. I pulled over on the side of the road, cried, and asked God to show me what I needed to do. I called my doctor in our hometown and he advised me to go on to Dallas, so I did. We got there and in 15 minutes of arriving at the ER we had a room. On this visit, they infiltrated her vein when giving her an IV and we had to have to PIC team come and give her a second IV. Her lipase was over 27,000. We spent 5 days in the hospital and then we were released. We went home to treat her there and she went in and out of pain for the next two months, but we were thankful to keep her at home.

We attempted to go to Disney World in between episodes because we thought she was over the September attack. We arrived at Disney World at 9 pm on a Tuesday night and we were back at home by 9 pm the next night. We rode four rides and she started throwing up and in pain. Our entire family cried as we all walked out of Magic Kingdom after riding five rides, in a hurry, trying to get Cesiley back to Texas where our insurance would let her be admitted to the hospital if needed. It was a sick tease to my kids to see all that was at Disney World- all the magic and excitement, and then have it all ripped away. We never saw anything at our hotel but the lobby and the room- we never saw Mickey or Minnie, or any characters, we never saw our hotel pool, we missed our character dinner that first night in Cinderella’s castle. Our 8-year-old still cries when she sees anything Disney. But we came home and got Cesiley the care she needed and she actually never had to be admitted.

How often was the hospital stays?

Our stays have only been about five days each. Most of the doctors as our last stay had to Google what she had. None of them had ever heard of it or knew how to treat it. 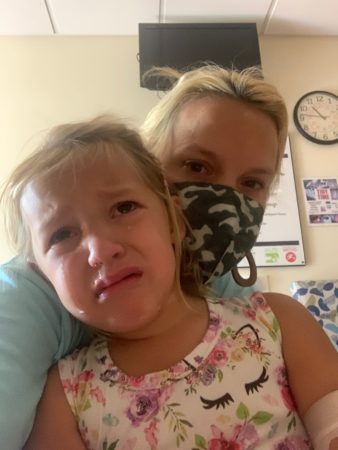 What were your actions/emotions after your child’s diagnosis? Did you go into research mode trying to read up everything there was to know?

Yes, and the only thing that helped me have been the Facebook groups of parents and of people who have this disease all trying to help each other. They have been my saving grace.

We had an amazing life. We have been so blessed. Now with this disease, I hurt for everyone in my family. My husband has PRSS1 so we need to find him a doctor that can do pancreatic cancer screenings on him. My other two kids could have PRSS1 but we have not had them tested yet. And Cesiley had to live her life in pain and in hospital, and she has such a hard road ahead. I cry multiple times a week just thinking about all that we have ahead of us. It is a lot mentally to deal with.

How did you explain pancreatitis to Cesiley?

At the age of 4, which is how old she is now, we just told her that her pancreas is sick.

What did you have to do differently to work around this pancreatitis? What’s a typical day for her in terms of food?

She is on a very low-fat diet, nothing fried, nothing chocolate, and lots of fluids. Even three french fries will make her hurt.  It is very hard to get her to go to school the two days a week she goes. She has learned how to say she is hurting to get out of going to her class at church or school. I have a very hard time determining if she is hurting or not, but it throws me into an instant panic attack. I am an attorney and I have had to pretty much cut my practice down to almost nothing. I have to be available to take care of her at any moment and I have to be available to be able to be out for weeks at a time. 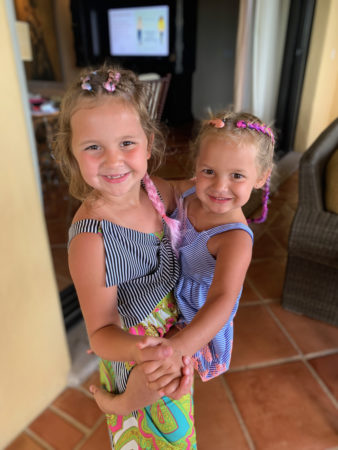 Cesiley (right) with her older sister

Any illness will take a toll on you mentally and physically. For kids that are living with a rare disease, what piece(s) of advice would you tell them to help them get through this?

I am so new to this, I don’t think I can give anyone advice right now, except to do genetic testing right away. The diagnosis was huge for us to find out what she had. Now we are just having issues trying to find someone to treat her. We have a doctor in Texas that we were referred to that we’ve heard understands this disease. He has been on leave for around three months and will be back at the beginning of the year. We haven’t found anyone else that we know understands her disease. We tried sending her to Minnesota and our insurance denied us. We are in the process of trying Ohio and getting on a new insurance plan that should start in January. Till then, we are praying she doesn’t have any attacks and that her pancreas is not being continually damaged waiting this out till we can get her help.

For you personally, what has helped you the most during this?

The Facebook groups of parents and kids that have this. They have guided us, given us advice, been there to call. I called one parent that I met through one of the FB groups at Disney World to get advice from her doctor. I called another one at 5 am the second time we had an attack. They have been so helpful. Cesiley loved Camp Hope – it happened to fall on the weekend we were supposed to be at Disney World, but when we had to come home and cancel our trip, it was awesome for her to be able to be a part of that. She has her box that came in for the Painted Turtle Camp this weekend and she is so excited about that.

How is your Cesiley doing now?

We made it through Thanksgiving as a family all together at home and we are so thankful for that. At the moment she seems like a totally normal child. However, any moment for no known reason she could go into an attack and we could have to rush to Dallas to the ER. We have no idea how much her pancreas has been damaged. We haven’t been able to get a doctor who can order an ERCP, but I know it is being damaged every day.