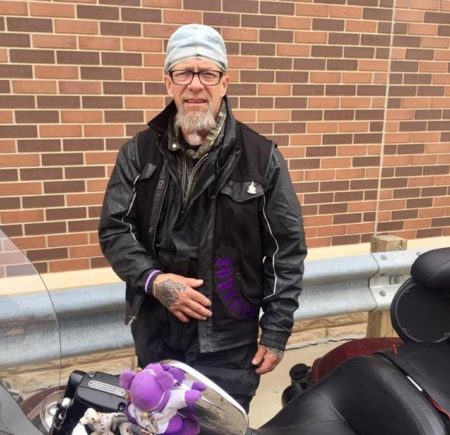 My husband Anthony Guido, was diagnosed with pancreatic adenocarcinoma, 17 months ago at stage III, where doctors found a mass in the head of his pancreas. Through his treatment he’s had 12 rounds of Folfirinox under the care of wonderful doctors and nurses at Dana-Farber (Boston) from June thru December of 2016, and had a break in October to receive five blasts of SBRT. By January of 2017, the CT scan showed that the tumor was stable and he began taking Lynparza in February which requires him to take two sets of six pills – a total of 12 daily. After remission, we decided to begin our celebratory cross-country motorcycle trip – to celebrate our 5th wedding anniversary, his 60th birthday, and life itself.

Riding together is our passion. Anthony purchased his first motorcycle in 1975 at 18-years-old and has ridden half a million miles in his lifetime. Together we have ridden to five Sturgis, South Dakota motorcycle rallies, four round trip New Hampshire – California trips, many trips throughout Maine, riding the entire coastal Route 1 to the Canadian border twice, and extensive riding throughout New Hampshire.

We had just traded a Harley Police motorcycle (that Anthony had ridden for 18 years) in August 2015 for a brand new Harley Ultra Classic touring bike. After riding it to Baltimore, where he worked as a construction superintendent, we ended up not having the opportunity to put more miles on it due to his demanding job. When he was let-go from his job following the biopsy of his tumor, we decided to return home to New Hampshire. Riding this motorcycle again was an important goal for Anthony. It gave him the incentive to keep his strength up with light exercise, when he would have much preferred putting the covers over his head. We took the bikes out as soon as the weather allowed and when he showed that he could handle riding it, we began packing our gear and headed out in May on our first “Team Guido Victory Tour” ride across the country, to visit our two oldest sons and their families in Southern California.

Our route has taken us to: 89 N out of Concord, New Hampshire; Vermont, New York, Pennsylvania, Ohio, Indiana, Illinois, Iowa, Minnesota, South Dakota, and Wyoming. On the morning of our wedding anniversary we woke near Badlands National Park (South Dakota) – one of our favorite places and rode through it on that special day. We’ve also ridden through Bighorn National Forest, Yellowstone National Park, Grand Tetons National Park, Cache National Forest, Snake River Canyon, and down around Salt Lake City/Great Salt Lake, taking 80 across the Utah Salt Flats into Nevada, where we battled extremely high winds. We are currently in California – and will ride the CA Coastal Route 1 from Fort Bragg down to Jenner, California where we will spend some time with our two oldest sons and their families, celebrating Anthony’s 60th Birthday with them, before they drop us in Las Vegas to catch our flight back to New Hampshire for Anthony’s monthly oncology lab work and doctor’s appointments. 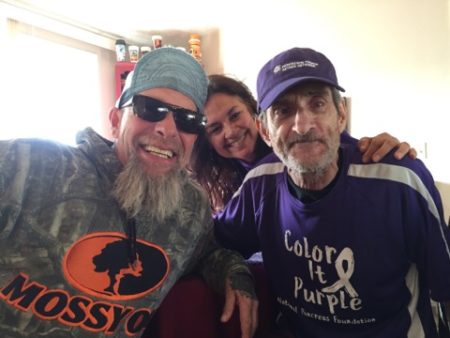 On this trip we’ve met people who want to know our story and have even given out a few of the NPF bracelets –  one to a waitress at truck stop we like going to west of Chicago, after talking with her extensively about pancreatic cancer. Anthony gave another to a woman who has an embroidery shop within “Iowa 80- The World’s Largest Truck Stop” and spoke extensively with her as we’ve had her make custom patches on a few of our trips. One patch says “Survivor ” – Anthony wears this on his riding vest.

Some of our favorite moments have been riding through Sturgis, South Dakota on Labor Day when there were no crowds – something we have long wanted to do. Riding through Devil’s Tower, Yellowstone, Grand Tetons and Jackson, Wyoming were also all very big on Anthony’s wish list. 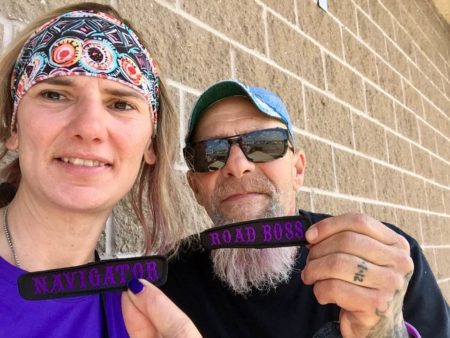 Being avid sea glass collectors, we especially enjoyed many hours of exploring the coves of Glass Beach. The most memorable event of our trip so far would probably be when a duck flew right into our path and smacked off my helmet in Big Horn or the buffalo that walked right past us up the roadway in Yellowstone.

We are so blessed to have been given this time together, due to the great care he has received and his excellent response to treatment. Our faith, the support and prayers of many family and friends have brought us through some of the toughest challenges we’ve faced- both Anthony’s battle against inoperable pancreatic cancer and the loss of our 22-month-old grandson, Lincoln, in a tragic accident. We believe that everyday is truly a gift, which we try to live to the fullest, for tomorrow is never promised.