Acute Pancreatitis – The Story of Eddie

Eddie was a 49 year-old long-haul truck driver. He was a smoker and liked to drink when he wasn’t driving. One winter he climbed into his truck a little hungover from the night before and began a long trip half-way across the country. He had to stop a couple of times to get antacid tablets to treat a gnawing pain in his belly which just seemed to get worse. The weather worsened and in the middle of a driving snowstorm he pulled his 18-wheeler into a rest area a few miles from our hospital. He could no longer drive as he was doubled-over with pain and he called 911.

When the EMTs brought Eddie into our Emergency Room, it was obvious that he was in big trouble. His blood pressure was low, he had a fast thready pulse, and was barely able to answer questions. He was obviously in shock. He was quickly admitted to the ICU, and the initial lab tests showed that he had a roaring case of acute pancreatitis, as well as probable sepsis (bacteria in the bloodstream). A CT scan didn’t actually show much other than some fluid around a normal shaped pancreas. But his signs of sepsis were very worrisome. After discussing it with the critical care team and the gastroenterologists, we decided to take Eddie to the operating room after his condition stabilized to see if we could get control of whatever was going on.

When we exposed Eddie’s pancreas, we saw something which we never expected (Figure 1). The gland appeared black, as if completely infarcted or dead. Usually, acute pancreatitis creates a boggy, swollen pancreas, which nonetheless looks like a pancreas. If it’s infected, a creamy pus can accumulate around the gland. But this was completely different, where the gland just looked like its blood supply had been cut off. The fluid around the pancreas resembled “dirty dishwater,” which was typical of an anaerobic infection – infection due to bacteria that thrive in a low oxygen environment – rather than the more common creamy pus that was typical of an aerobic infection as with E. coli, the most common cause. 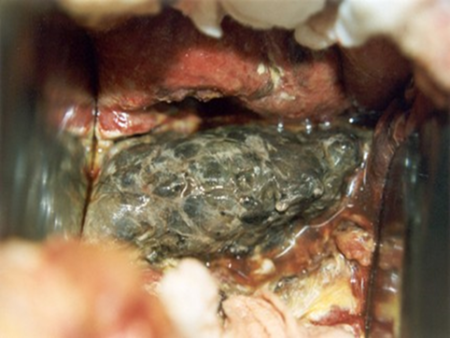 Figure 1. The pancreas appeared completely infarcted (without any blood supply) with necrotic (dead) tissue. The gland was surrounded by “dirty dishwater” fluid suggestive of an anaerobic infection.

We carefully began to peel off the dead, necrotic tissue from the surface of the pancreas, as this is a rich source of nutrients for the bacteria and is beyond the reach of antibiotics in the blood stream. We nibbled away carefully as we didn’t want to tear any part of the gland which still had blood supply as that bleeding would be very difficult to stop. This process of removing dead or infected tissue is called debridement and is a basic surgical method to control infections.

We washed out Eddie’s abdomen with lots of warm saline solution and placed soft rubber drains around the pancreas to allow the fluid to drain to the outside. Then we took him back to the ICU for continued care. He seemed to stabilize, and two days later we took him back to the OR to see what was happening to the pancreas (Figure 2). There were still areas of what appeared to be dead tissue on the surface of the distal pancreas, or tail, but there were also a few areas that looked pink, as if some healing tissue was developing. We again washed out his abdomen and replaced the soft drains, and two days later took him back to the OR once again where things continued to look stable with more signs of healing. The washouts and the debridement and the drain placements controlled his infection and the broad-spectrum antibiotics were changed to target the organisms that grew out of the cultures in the lab. 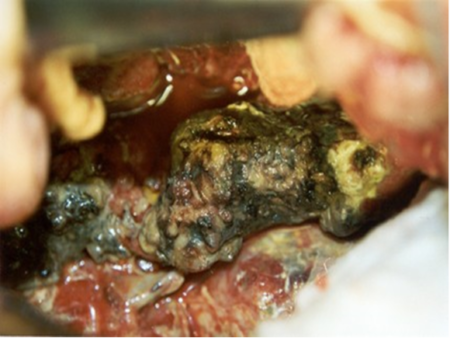 Figure 2. Two days later, the pancreas still had evidence of necrotic tissue but also showed some areas of pink tissue that suggested some healing.

Eddie slowly recovered, although it took weeks, and not surprisingly he developed diabetes due to the loss of so much of his pancreas. But he survived and was grateful for all the care he had received before being finally discharged to a rehabilitation facility close to his home. He had to learn to care for his diabetes, which was a bit of a challenge for him, and it took a while for him to finally be able to eat a “normal” diet. During his recovery his nutrition was provided by a feeding tube that went through his nose, down through his stomach to the small intestine well past the pancreas. After slowly tapering his liquid tube feedings, he was finally able to consume enough calories by mouth to get rid of the tube. He had lost close to 20 pounds in his ordeal, but finally began to put on some weight and gain some energy with the help of physical therapy treatments. He wrote to me almost a year later and told me that he had never returned to long-haul driving and was now working as a patient-care assistant at his local hospital. I thought that was a great outcome both for him and for the patients with acute illness that he was helping to care for.

The Causes and Categories of Acute Pancreatitis

Acute pancreatitis is a very common problem. More than 270,000 patients are discharged from hospitals every year with this diagnosis. Most cases of acute pancreatitis are mild, meaning that the patient recovers in a few days, but about 20% of cases are classified as severe with accompanying organ failure or sepsis. Although the risk of death is very low in mild cases, the mortality risk increases to 25-30% in severe cases like Eddie’s, and the overall death rate for the disease is 8-9%.

There is no FDA-approved drug to treat acute pancreatitis, so the care consists of what we call supportive care, meaning intravenous fluids, nasogastric suction, nutritional support, pain medicine, and antibiotics if they are needed. When patients are severely ill, they receive intensive care with medicines to support their blood pressure and ventilator assistance if they are unable to breathe on their own.

We try to avoid operating on patients with acute pancreatitis, as we have learned that the outcomes are better if we delay as long as possible treating the fluid collections and necrotic tissue that accumulates around the pancreas. When the patient has obvious sepsis likely originating from an infected pancreas, we are then forced to try surgical approaches to reduce the infection. Such was the case with Eddie.

There are many causes of acute pancreatitis. Alcohol and smoking, separately or together, are associated with many cases, and it used to be assumed that virtually all cases of acute pancreatitis were due to heavy or binge drinking. But now we know that this only accounts for about 40% of cases, and many other causes exist including the passage of gallstones down the bile duct from the gallbladder to the duodenum, high levels of fat (triglycerides) in the blood stream, a hereditary cause due to a mutation in the genes that regulate enzymes within the pancreas, or certain drugs. The cause of many cases is never discovered, and these cases are called idiopathic pancreatitis, which just means we don’t know the cause.

The pancreas is a very active gland and normally produces from one to three cups of pancreatic juice every day. This juice contains a number of enzymes that help us to digest the food we eat, including enzymes to break down proteins, called proteases, that have to be kept in an inactive form until they are released into the intestine. If the proteases become active inside the pancreas they can start to disgest the pancreas itself. This is what happens in acute pancreatitis when either because of a blockage of the duct (due to an obstructing gallstone) or the toxic effects of alcohol or drugs which poison the enzyme producing cells, or the effects of high levels of fatty acids in the blood stream which cause a sort of overdrive of the enzyme production that exceeds the capacity of the gland to protect itself from their effects, the net result is that the pancreas is stunned so that it cannot flush out the duct of these enzymes and they start to damage the pancreas itself. When that happens, a huge inflammatory reaction occurs and this causes more tissue damage. In mild acute pancreatitis, the effect is transitory and the gland recovers as long as it is not being further stimulated. In severe disease, the inflammation causes blood flow to stop and infection takes over. This causes the release of other chemicals called cytokines that cause fluid buildup in the lungs and damage to other organs such as the liver.

More information about acute pancreatitis can be found at the website of the National Pancreas Foundation www.pancreasfoundation.org.