HomeErin’s Story of Hope and Strength

June 6th is National Cancer Survivors Day. We asked Erin Rigsby, to update us on her pancreatic cancer journey. (You can read the full story below) Erin was diagnosed with pancreatic cancer in 2015 and in March 2021, she was able to celebrate five years of being cancer-free. 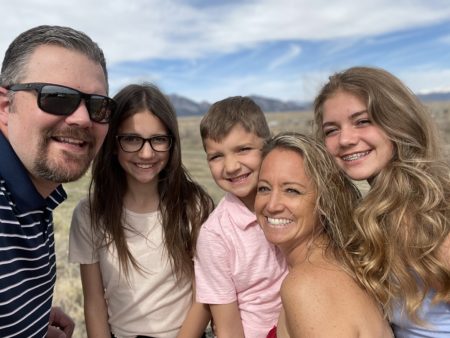 It’s funny how life works sometimes. As I sit here, excited to add a 5-year survivor update to my story, I can only be amazed at how my life has come full circle. I now can answer so many of the questions I had before. I can now say without a doubt we were meant to move across the country when we did. I was meant to meet my amazing
support group when I did, and now being back in Colorado, I know this is where we are meant to be. We are forever changed, but it is a change that is meant to be celebrated! Some parts were scary and some parts were sad, but it was all meant to be. When we first left Colorado, there was probably less than a 10% chance of ever moving back. We left our friends and family to set off on an adventure even larger than we could have ever imagined. Ten percent…I guess I have never looked at this journey in terms of numbers.

Lots of questions about why/how/when, but never a 10% chance. The same 10% chance I had at surviving pancreatic cancer, we had at moving home. I am so grateful for the team of doctors, nurses, supporters, friends, family, anyone who touched my life in the last five years. To think that I had, and will have, the honor to continue with my beautiful journey is such a blessing. But a 10% survival rate also makes me angry and sad. Angry that such a horrible thing can sneak in and take so much away from so many people. Angry that we have such amazing advances in science and yet 10% is where we’re at. Sad that so many others will not be as fortunate as me. Sad that we have come so far and yet are still so far away in curing cancer and detecting it sooner. 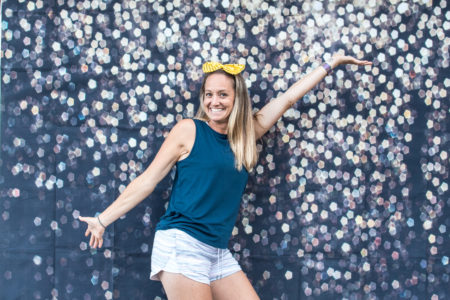 Three years ago when I first was honored to run in support for the National Pancreas Foundation I was still so stuck on the why. But now that I have had five years to conquer cancer, and ponder that question, I know. I know if not me then someone else. Someone who maybe wasn’t as physically or mentally strong. Someone who was not in as good of health or who didn’t have as much youth on their side. Why me? Because I was meant to be in that 10%, to share my story and spread awareness. To be there to support and encourage others who may be asking that same question right now. To shout from the rooftops to listen to your body! No one knows you, better than you! If something feels off, go have it checked out. If you don’t like the answer you go get a second opinion. The road was not always easy, and it tested me in so many ways, but I am here.

I am a survivor.

January 2015. We had just completed our first full year of living in Pennsylvania. Still adjusting to a new home, city, and state, we had started to make a few friends. I went from working full-time in Colorado, to staying at home full-time with our youngest child here. I had decided it was time to do something for myself, so I started working out five days a week in our basement. By June of that year I was in the best shape of my life! I felt great, looked good, had tons of energy, and was super motivated to keep going. I had completely removed sugar from my diet, and was teaching some of our new friends about many of the harmful additives some of our food contains. Some initially thought I was a bit crazy, but soon came to realize that this line of thinking had some truth to it.

That same month, we left for a short family vacation to Delaware, to visit family and on to Virginia to visit some friends. By the time we got to Virginia, I was having a hard time eating. Everything I ate seemed to make me feel bloated, and overly full — like double Thanksgiving full! When we returned home I spent the next few weeks playing with my diet (removing dairy, limiting gluten, etc.), and attributing the intense bloating sensation to all the food we ate while on vacation, and not the home cooked goodness I had been used to. Nothing seemed to be working. One evening I was trying to show my husband the general area of discomfort and I noticed what I thought was a golf ball sized lump on my left side. Thinking I had pulled a muscle or did something while working out, I went to the doctor (the doctor that I had only met once before for strep throat.) She couldn’t feel anything but was kind enough to order an ultrasound of my stomach and abdomen. It was then reported to me, I had a large mass on my pancreas, but not to worry, after the holiday (4th of July) they would order a CT scan for a better evaluation. Ha! I was 34, in the best shape of my life, had three great kids, and an amazing husband, what was there to worry about!?

I went into an instant panic mode. Tears and mass hysteria broke out in my head. Was it cancer? How long do I have? How am I going to tell my kids? The worst part was my support system for this kind of panic was 1,200 miles away in Colorado. After an incredibly emotional weekend, and a weekend where my symptoms seemed to worsen to the point of actual pain instead of discomfort, I finally had a CT scan. It was then when we realized just how beastly this mass really was. Measuring in at 12 centimeters in diameter (no, that is not a typo…it was recorded in cm not mm) was a mass on the tail of my pancreas. My current doctor referred me to a general practice surgeon to have it removed. Not feeling comfortable with a general practice surgeon I reached out to my lifeline of connections and people I could trust. Through a crazy chain of everyone-knows-someone, I found a doctor specializing in digestive disorders and pancreatic cancer here in Pittsburgh. I met with the doctor and knew instantly that I had made the right choice reaching out. It was said to be a Solid Pseudopapillary Neoplasm, a rare neoplasm of the pancreas typically affecting young women, relatively benign, with a favorable prognosis and generally found by accident. My surgeon had dealt with these neoplasms in the past and had many positive stories to share.

Before surgery, I was to have a biopsy to confirm the best course of treatment. It was here where the doctors determined it to be an invasive Mucinous Cystic Neoplasm. This was again a very similar tumor and even more exclusively found in women, but with a higher chance of malignancy. I went through nine hours of laparoscopic surgery for a splenectomy and distal pancreatectomy. It was after the removal of the tumor and full biopsy that they discovered two small areas to be malignant. The good news was the tissue around the neoplasm looked good as well as the 21 tested lymph nodes. We were taking the whole process in strides until I met with an oncologist and read the words ‘Stage 1 pancreatic cancer’ on the paper. It hit me like a ton of bricks. Removed or not, I had cancer in my body—my temple that I had worked so hard to keep pure and maintain. This suddenly became more of a mental than a physical challenge. Cancer does not run in my family, so why me? I have eaten healthy my whole life. I grew up on mostly organic foods, and exercise has always been part of my life. Why not the person who smokes three packs a day and eats twinkles for breakfast? (Not that I would want this to happen to anyone) It just did not make any sense to my family and I.

It was determined that even though the mass was removed, I should follow a course of chemotherapy to make sure that all cancer was really gone. I received a port, which we labeled my “magic button” for the kids, and began chemotherapy once a week, 3 weeks on and 1 week off for 6 months. I will never forget the first day of treatment and two amazing women who supported us through the entire six months. One sat by my side every Monday for two and a half hours while I received my treatment, and the other who with open arms took care of our then 3-year-old son while I was gone – talk about meeting the right people at the right time! Walking into the wing of a hospital labeled “Cancer Center”, and walking past the hair/wig salon, and then entering a room where the majority of the individuals there could be my grandparents. Every time I walked through that door, I could feel the air go still and all the eyes looking at me. I always wondered what they were thinking, for me, it was how blessed I was to be going through all of this at a young age when I still had the health and energy to really fight. I wished so many times I could pass some of that on. So many fragile bodies that this disease has taken over…young, old, and everything in-between. Physically I had overcome so much, but mentally I have a long way to go. Over the course of the six months, I met fellow cancer patients during chemotherapy who had wonderful stories to tell about their childhood and growing up around PA, their children, grandchildren, and jobs. Some I saw often and others were never a fortunate as I to make it through another day. I even met a gentleman who grew up a mile from my childhood home in Boulder, Colorado.

As I prepare to go in for another scan, I am confronted with the realization that no matter how much I feel I have conquered cancer, it still keeps fighting back, not physically but mentally. Each stomach ache, pain, or cramp is followed by a brief panic of “did it come back?”. I find myself holding my breath between scans and doctor visits to confirm everything is still good. As soon as I reach the 5-year mark, I am “set free”, and will no longer go in for scans and frequent (every three months) visits with my oncologist. In some ways, I think it will be totally liberating, but in other ways, I am worried about the thoughts in the back of my mind and wonder how much they will consume me without the reassurance of the every 6-month scan. I do know one thing for sure, the power of prayer and supportive family, friends, and community is indescribable. The love and support I have been blessed with is beyond compare. Life is such a gift, and is never to be wasted!