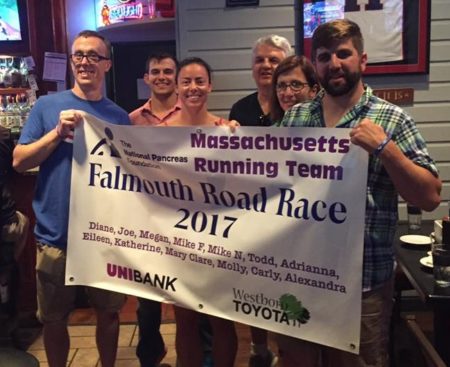 I’m excited to say this year’s NPF team running the Falmouth Road Race was a success. This year, our first year, our team of 6 NPF runners and 7 ‘team support’ runners raised over $15,730. Having a team running for NPF has been a dream of mine since 2006. Back a year or two before that year, I was struggling with severe illness and its physical affects due to pancreatitis. I struggled to gain weight and gain strength and running was an important part of my recovery.

This summer was my 6th year running the race. The race draws from vacationers on Cape Cod and in Massachusetts as well as world class runners from around the globe. Thousands of runners brave the hot summer course along breathtaking oceans views to meet their personal goals.

This year’s NPF team was an energetic group of runners with varying interest in pancreas disease. Pancreatic Cancer has affected 12 of the 13 runners – each with a story close to their hearts. Our team, unified by training emails, running shirts and pre-race gathering, ran to support the only national organization that supports all pancreas diseases: the National Pancreas Foundation. – Diane Tonelli, NPF Massachusetts Chapter Chair