Intraductal papillary mucinous neoplasms, or IPMNs, are common. The high incidence of IPMNs in our population is a relatively recent discovery; 30 years ago we saw patients who had swollen, mucous-filled pancreatic ducts, a condition mistakenly thought to be benign that was labeled mucinous ductal ectasia. Then it became known that the cause was a mucus-producing tumor of the lining of the pancreatic duct that had the capacity to degenerate into a pancreatic cancer (pancreatic ductal adenocarcinoma or PDAC). These tiny polypoid lesions resemble colon polyps that have the capacity to degenerate into colon cancer. But they are much smaller than colon polyps and the major problem is we can’t perform endoscopic screening of the pancreatic ducts as easily as we can endoscopically survey the colon. So IPMNs are detected by ultrasound or CT scan, and are usually found accidentally when a scan is performed to look for something else.

IPMNs produce mucin, which is a clear jelly-like protein that causes a build-up of mucus within the pancreatic duct. This results in a swelling or dilatation of the main pancreatic duct when a main duct IPMN is present, or what looks like a cyst which is actually a swelling of a side branch when an IPMN is located there. We can’t always tell which IPMN patient is at high risk for PDAC; we know that IPMNs which arise in the main duct of the pancreas are high-risk, but we have great difficulty telling which branch duct IPMN, of which there are many more, needs to be removed. Patients who just have small peripheral or branch-duct IPMNs, and their doctors, usually engage in a waiting game with periodic imaging tests to see if the lesion will grow or develop ominous signs, with some risk and a lot of anxiety. Some patients have a combination of main duct and branch duct IPMNs which means that the entire pancreas is affected by the condition.

A Patient Discovers He Has a High-Risk Problem

Harvey was a 62 year old college professor who happened to be married to a nurse. He was attentive to his own health issues, and his wife made sure that he saw his personal physician regularly for check-ups. Other than some symptoms of prostate enlargement, he felt well.  When his routine blood tests showed an abnormality in his kidney function, he was sent to a kidney specialist who suspected that Harvey’s prostate was causing some obstruction of his lower urinary tract and ordered a CT scan. The scan confirmed an enlarged prostate but also showed some dramatic changes in Harvey’s pancreas.  Instead of looking like a uniform, evenly textured gland draped across the back of his abdomen, Harvey’s pancreas looked like a cluster of grapes, large and small, with a swollen pancreatic duct (Figure 1). 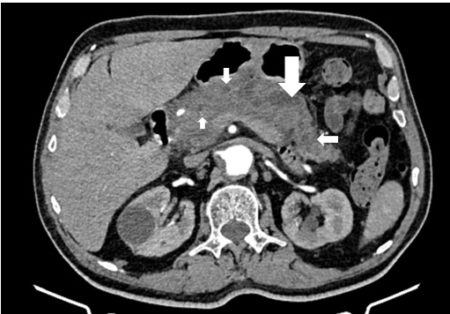 He underwent an EUS examination, which confirmed the presence of many cysts or cystic-appearing changes throughout the pancreas, and a pancreatic duct that was filled with mucus. There was no sign of a tumor, but the pancreas was overrun by IPMNs of both the main duct and the side branches (Figure 2).

The picture of diffuse IPMN disease of both the main and secondary ducts is a high-risk condition for the development of invasive pancreatic cancer, and an indication for complete removal of the gland. Harvey and his wife were stunned by the news. He had no obvious symptoms of pancreatic disease, but certainly understood the implications of pancreatic cancer. So after learning more about it, and the consequences of living without a pancreas, he and his wife agreed to go ahead with radical surgery to remove all of the precancerous lesions and hopefully prevent the occurrence of invasive cancer. 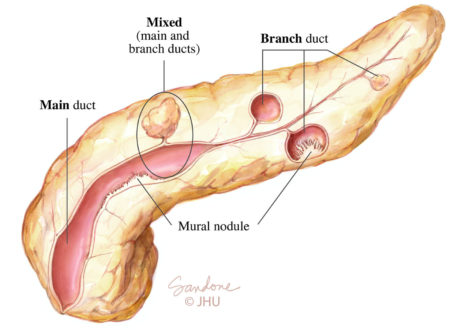 Figure 2. Illustration of Main Duct IPMN which appears as a Mural (as in attached to the wall) nodule, Branch Duct IPMNs which may appear as small cysts or which may show a Mural nodule within them, and Mixed Type IPMNs, meaning they are close to the main pancreatic duct. The mural nodule is a sign of malignancy (PDAC) developing within the IPMN. (Illustration by C.Sandone © 2014 Johns Hopkins University, used with permission)

Total pancreatectomy is a radical procedure but in some ways is easier and safer to perform than a Whipple procedure because no reconnection of the pancreatic remnant is needed. The problem is the devastating metabolic condition that results from loss of the entire pancreas. The complete removal of all of the hormone-secreting cells means that there is no insulin to guide glucose (sugar) into the cells where it is needed, and no glucagon (another islet hormone) to reverse dangerously low blood sugar levels if and when they occur. In addition to the “brittle” pancreatogenic or type 3c diabetes that results, there is also a complete loss of the digestive enzymes that normally facilitate the digestion of the carbohydrates, proteins, and fats which comprise our diet. Patients who have undergone a total pancreatectomy therefore need very careful attention to their lifelong pancreatic enzyme replacement schedule, which can vary depending on what sort of diet they eat, and need exquisite attention to their diabetes management.

In the late 1960s and early 1970s, total pancreatectomy was sometimes considered as a last resort therapy for patients with advanced chronic pancreatitis, a chronic inflammation of the pancreas that can cause relentless, disabling pain. It was discovered that although the patients’ pain resolved, total pancreatectomy caused such terrible metabolic problems after the surgery that the approach was subsequently discouraged from use except as a last-resort treatment of cancer.

In 1977, a method was developed by surgeons at the University of Minnesota to isolate or extract the hormone-secreting islets from the diseased pancreas after it was removed, and then to give the islets back to the patient by infusing them into the liver. The islet “auto-transplant” was an attempt to prevent the devastating diabetic state that would result from total pancreatectomy, and the use of total pancreatectomy with islet auto-transplantation, or TP-IAT, is now offered at 15 medical centers around the country for the treatment of chronic pancreatitis associated with refractory, relentless, pancreatic pain.

Harvey was not a candidate for the islet auto-transplant procedure because he had a pancreas that was filled with pre-malignant, if not malignant, lesions. The worry is that if you isolate the islets from such a gland, you might inadvertently transplant cells which might go on to become an invasive cancer. So TP-IAT is not used when malignancy or pre-malignancy is the indication for the total pancreatectomy; other methods need to be used to treat the brittle diabetes caused by total pancreatectomy. This can mean either multiple doses of insulin injections per day, with careful monitoring of blood glucose, or the use of an insulin pump. Insulin pumps are small and inconspicuous, and interfere so little with the patient’s activities, that athletes and active individuals find them a great advance. Recently, insulin pumps have been “married” to continuous glucose monitors with sensors that are inserted on or under the skin and remain there for days at a time. The continuous glucose monitor, or CGM, tells the pump how much insulin to give, or when to stop infusing the insulin, and this “artificial pancreas” serves to keep the blood sugar in the normal range. The patient still needs to double-check their blood glucose levels frequently and make sure the CGM is properly calibrated, but this technology has revolutionized the treatment of diabetes particularly for pediatric and adolescent patients.

Harvey understood the demands of his post-operative care and had the good luck to be married to a nurse, to boot. So he was judged to be a good candidate for total pancreatectomy and a candidate for insulin pump therapy of his inevitable post-operative type 3c diabetes. The operation to remove his entire pancreas went very smoothly, and we saw no evidence of cancer in or around the pancreas. The gland itself looked like a bubbly cluster of cysts and was diseased from head to tail. After its removal, the pathologist confirmed that many IPMNs were nestled in the gland, but none contained invasive cancer.

Harvey recovered uneventfully from his procedure and was managed with multiple doses of insulin each day until he was back on a regular diet and was exercising regularly at home. At that time, he was started on insulin pump therapy, and did very well with regular blood sugar checks on his own. He quickly resumed his teaching schedule, and he and his wife sent me postcards of their interesting vacation trips over the next 10 years. Unfortunately, his renal failure finally progressed to the point where he needed to go on to dialysis. He seemed optimistic nonetheless and said that he was “going to do just fine” despite the rigors of his dialysis, and just hoped that he might be lucky enough to get a kidney transplant one day.

The challenge of choosing a course of action for IPMNs

Main duct IPMNs have a high rate of harboring a cancer or PDAC; more than half of them are malignant, and surgical removal is recommended for almost all of them. Fortunately, the result of surgery is better than for typical PDAC, in part due to the fact that the cancers are much smaller, and partly due to the fact that the version of PDAC that arises from the IPMN seems to behave differently in terms of its capacity to spread and grow compared to “garden variety” PDAC. The problem is knowing what to do about the Branch Duct IPMNs, which are far more common, but much less likely to harbor a PDAC. There are several features which are suggestive of a malignancy, such as when a Branch Duct IPMN appears to be growing or if it shows the sign of a mural nodule. But these signs are not definitive, and patients who have only one or two small branch duct IPMNs are usually advised just to have periodic imaging studies to watch for changes.

The complete removal of the pancreas is a major medical event – both as a surgical procedure, and as a life-changing event in the health of the patient. One of the inhibitors of progress in treating pancreatic disease has been the appropriate reluctance to submit a patient to total pancreatectomy when the risk of pancreatic cancer is high but the tumor is not yet present. In addition to considering TP-IAT for patients who have a strong family history of PDAC there needs to be more research on the development of a truly artificial pancreas, one that automatically provides not just insulin but all the pancreatic hormones which help to regulate blood sugar, and which controls the release of these hormones appropriately. The opportunity for breakthrough bioengineering advances in the field of pancreatic replacement is clear; we need to do all we can to facilitate this goal.