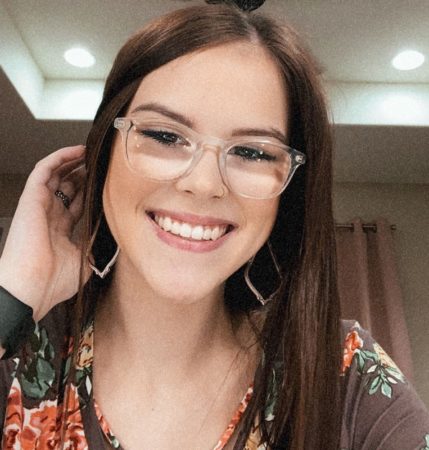 Jenna M. is 18-years-old and from East Texas. She was 13 when she had her first pancreatitis attack, due to Cystic Fibrosis which has affected her pancreas (and not her lungs). Jenna shares her pancreatitis journey, how she found the National Pancreas Foundation as a resource and hopes she can become an advocate for other patients as well.

How old were you when you had your first bout of pancreatitis?
I was 13 years old when I had my first bout of pancreatitis. It was a week before we were supposed to be moving from Minnesota to Texas. I was completely terrified. I never went to the doctor for anything growing up. When my mom said that she was taking me into the Emergency Room, but I told her absolutely not. There was no way I was going to see a physician. Doctors were my biggest fear then. Looking back, if I never let her take me to the ER, my circumstances would have been a lot worse.

What did you think it was initially?
At first, I thought it was just a stomachache and that it would go away soon. Until I kept trying to eat and the pain just got worse and worse. The pain got to the point that I was curled up in a ball on the floor screaming. That’s when I knew something was really wrong. I kept it a secret from my family, but I knew they were soon to notice that something just wasn’t right. I wasn’t eating or drinking anything at all. I didn’t want to get up off the couch. I didn’t even want to go out when the family was going out. That was not normal for me. This was three days before I was taken to the ER.

I have only been hospitalized for the first and second bouts of pancreatitis. In the second, I was transported in an ambulance from my local hospital to Children’s in Dallas. When I was in the hospital, I was told I could not get any pain medicine other than ibuprofen. For anyone who has gone through pancreatitis knows that ibuprofen doesn’t even touch the pain. I decided that I was not being put in the hospital again for pancreatitis. From May of 2016 to March of 2021, I went through pancreatitis at home with no pain medicine or anything. I give myself props for being able to go through it alone with nothing to help the pain. 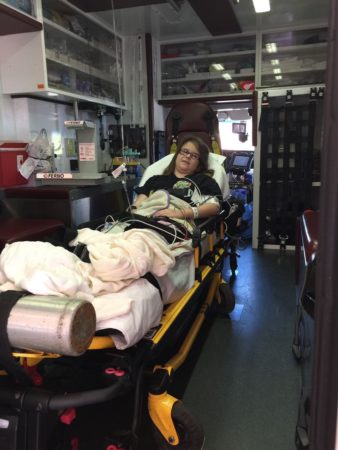 Jenna being transported by ambulance to the hospital for pancreatitis.

Did your doctors know it was pancreatitis right away?
When we went into the ER we were seen by the doctor. They made me jump around and pressed on my abdomen. Both were extremely painful. She told us it was either just a little kid’s stomachache or appendicitis and to go home and sleep it off and if it got worse to come back. We had gotten dinner on the way home. While I was trying to force myself to eat, the pain just got worse and worse. We were at home for roughly 45 minutes before I started running a fever and I told my mom we needed to go back. By the time we returned to the ER, the doctors had rotated, and we saw a different doctor who immediately sent me for a CT scan. I was told I was having pancreatitis and that I was being admitted to the hospital.

Also, because of my pancreatitis, a test was done that revealed I had Cystic Fibrosis. This was a huge surprise to all of us as my parents had absolutely no idea they were carriers of the gene. In the past 5 years of being diagnosed, I never had a problem with my lungs, it strictly attacked my pancreas. I was on and off of enzymes before surgery and had many ERCP’s to try and help my pancreatitis but was unsuccessful.

Can you tell us what your life was like before pancreatitis?
Life before pancreatitis was a dream. I never worried about having to go to the doctor. I played Junior Olympic traveling volleyball. That was changed very quickly after being diagnosed with Cystic Fibrosis. I was able to go to school full time and do extra-curricular activities. I had to change my whole lifestyle after my first bout of pancreatitis. But it has made me the strong person I am today. I wouldn’t be where I am today if I didn’t go through what I have gone through. 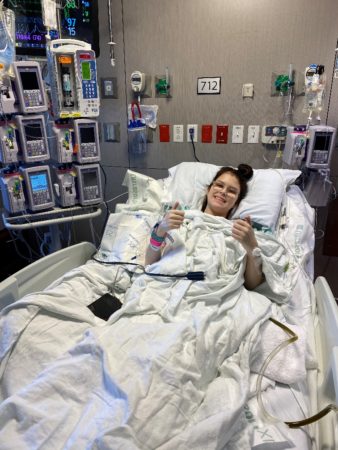 At Baylor Medical Center the day after her TPIAT.

What was the main factor in the TPIAT surgery? Had you ever had surgery before?
Before the TPIAT surgery, I had the Puestow procedure. I had that surgery because we thought it would help with the constant nausea I was having. I couldn’t eat without getting nauseous after. That worked for about a year and a half. One day I started being nauseous again and it lasted for two years straight before I had the TPIAT. I was so miserable. We thought the TPIAT would be the last resort surgery, but soon we found out that it would be the best choice to make before my pancreas got so damaged that they wouldn’t be able to get Islet Cells. So we made the decision to have the TPIAT as soon as possible.

What was your recovery like?
Only being four months post-op, the first three and a half months of my recovery were rough. I didn’t feel good, I never had energy, I was very down. I finally got my energy as close to normal as it can be right now. My nausea is 100% gone. I couldn’t tell you off the top of my head the last time I said I was nauseous. My biggest struggle right now is my blood sugars. It’s a roller coaster but it’s slowly starting to get better the more I learn what to do. It has all been worth it. 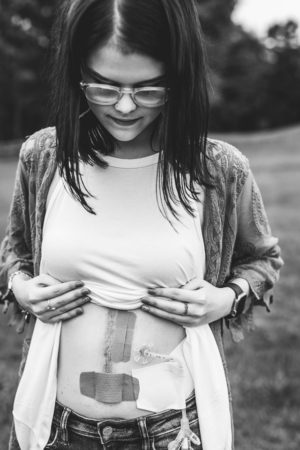 Any illness will take a toll on you mentally and physically. For kids that are living with pancreatitis as well, what piece(s) of advice would you tell them to help them get through this? What would you tell patients?
Stay positive. It may be rough in the beginning, but it will get better. You’ll start to feel more like yourself and more normal than you were. Reaching out to others who had the TPIAT surgery as well is very helpful. I know how it feels to feel so alone during the whole process. Reaching out helps change that. There are people out there that physically and mentally understand exactly what you are going through. Sharing your story and experience with others is such a great feeling and it helps educate others on pancreatitis. Everyone who goes through the TPIAT surgery is so strong!

For you personally, what has helped you the most during this ordeal?
The biggest help has been raising awareness. Telling my story and explaining the TPIAT surgery to others has made me feel a lot better. Just to see that there are people who are interested in things that are possible is amazing. Reaching out to others who have had the TPIAT as well has also been very helpful. In the beginning, I felt so alone. Reaching out has really helped me not feel so alone. It has shown me that there are others out there, even though their story and experience may be different, they still understand what I am going through and how they can help me. 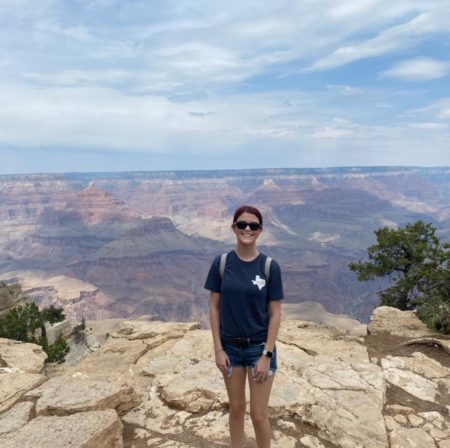 At the Grand Canyon with many more adventures to come.

How are you feeling now? And how is your life now post-TPIAT?
I am starting to feel so much better. I feel as close to normal as I ever have. I still have some rough days but who doesn’t. I am still learning all the changes that have happened to my body, especially diabetes. That’s a whole change that has been a crazy experience. My life now post-TPIAT is amazing. I have been back in work and college for about two months post-op. It was driving me crazy to sit at home and have nothing to do. I am a very busy person and I don’t like when anything slows me down. I am back to traveling, hanging out with friends and family, and living my best life with my amazing support system.

How did you learn about the National Pancreas Foundation?
I learned about the National Pancreas Foundation through YouTube. I searched on YouTube one day looking for others who have had the TPIAT and came across Cecilia Petricone’s video. After watching her video, I went to her Instagram and came across the NPF’s Instagram page. After reaching out to Cecilia, I had the opportunity to share my story and help others so they know they are not alone.