Triumph of Will Over Reason – John’s Story 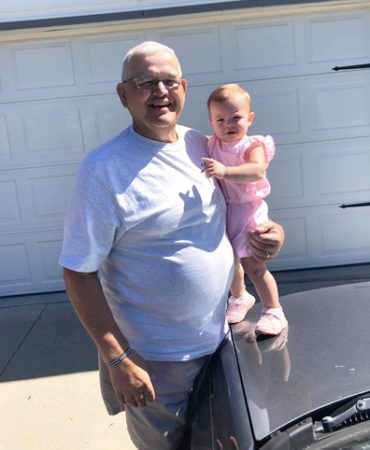 Johns’ father Charles and his granddaughter.

There is a proverbial point in a marathon that can bring even the most seasoned runner to their breaking point. Runners refer to this point as the wall. It’s what makes the marathon distance so challenging. The wall can simply be defined as the point where a runner, hypothetically, runs out of energy. It’s the point at which you feel like you can’t go on…like you are about to give up. You will often reach this wall at the peak of your perceived maximum physical capacity. The wall can demoralize you, it can taunt you, it can even break you if you allow it. In this state of physical depletion and hopelessness, the body must teeter the line between the will of the heart and the voice of reason. It is in this delicate dance of perseverance, where the real internal marathon is either won or lost.

Life is full of walls. Walls of daunting opposition that seem to tilt the very axis of what you thought was going to happen or what you thought should happen. In December of 2016, I came face to face with one of life’s towering walls. My dad looked me in the eyes and told me he had been diagnosed with stage 3 pancreatic cancer. Without treatment, his life expectancy was very short. At that moment, he was still deciding between treatment or treaty, between a cancer battle or a cancer war. My father chose the war and was able to turn a seemingly bleak forecast into a two-year fight. In that fight, I learned one of the greatest lessons my dad ever taught me – perseverance. 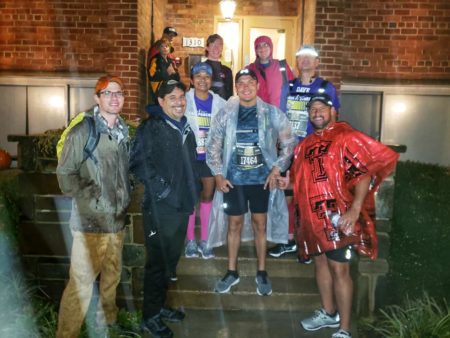 John (center) with the 2019 Team Pancreas group the morning of the Marine Corps Marathon. Ready to run in the rain!

I’ll spare the details of those final years, as I watched the horrific disease that is pancreatic cancer steadily eat away at my dad’s health. There were highs and lows, hopes and discouragements, pain and moments I’ll cherish forever. But as a young man, I saw remarkable courage and undaunted character my dad bestowed within the midst of the storm. I saw him fight, endure, and persevere through some very dark and difficult times when the finish line was uncertain and certainly not promised. He passed away in December of 2018, surrounded by loved ones with a willful heart and a resolute spirit. Sometimes, in the midst of a loss, you can peer through the current heartache and pain and realize that there is more to the present situation than what is gained or what is lost. The true lesson learned is simply – how to keep going.

In keeping my father’s spirit alive, I joined Team Pancreas through the National Pancreas Foundation to raise support and awareness for pancreatic cancer and pancreatitis. With the help and encouragement of the team, I’ve been able to toe the start line at the 2019 Marine Corps Marathon (my first marathon) and the 2020 Marine Corps 50K (this year all races were virtual), my first ultra. With the help of my dad, and the example he gave me, I was also able to toe the finish lines of each contest with success and with a purpose. 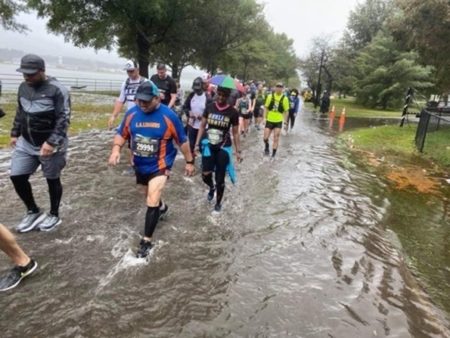 When I was making my preparations for my virgin expedition into endurance running, I came across a very simple, yet profound definition for the humble marathon. The definition read: Marathon [noun]: 1. A footrace of 26 miles, 385 yards. 2. A contest of endurance. 3. The triumph of will over reason. The triumph of will over reason. If I had to put the feeling of the final miles of the marathon into words, it would be that precise statement. 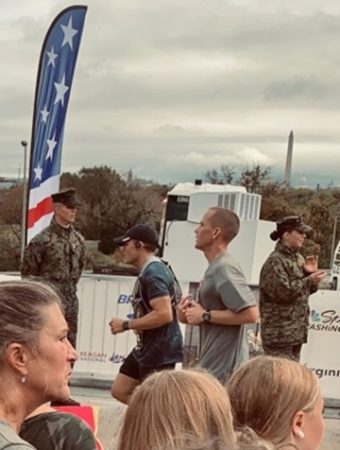 At the last .2 mile of the marathon.

Another marathon runner once famously said, “Everything you ever wanted to know about yourself, you can learn in 26.2 miles.” The daunting aspect of the marathon lies in the shadow of your own personal limitations and in what you are willing to endure. Psychologically, you gain far more than you lose. You realize that you can push through some very dark places and pains; accomplishing something great with a little bit of grit and a hefty dose of perseverance. You realize that your mind is a liar. You can go further than your mind wants to admit, the pain is not as insurmountable as your mind proclaims, and all the anguish (both before and after the run) is temporary. You simply have to keep going.

T.S. Eliot once said: “Only those who will risk going too far, can possibly find out how far one can go.” Everyone faces walls in this brief vapor we call life. How you respond to these opposing forces, in the midst of the storm, is where the true victory lies. Endurance is not just the ability to bear a hard thing, but to turn it into something greater than oneself. Failures are only failures if you stop trying.

I want to thank the National Pancreas Foundation and Team Pancreas for all the support and encouragement over the past two years. Please support and continue raising awareness for pancreatic disease. Run for a cause and endure till the end. There is always hope.