The secret to achieving long-term survival after pancreatic cancer surgery is to identify those patients who will truly benefit from it and avoid complication-prone operations in those who will not. The challenge is in identifying the patients who have “more favorable” disease, or more accurately, to determine where on the spectrum of likely survival a surgical candidate actually resides. We can predict the likelihood of survival after the surgery, based on the report of the pathologist who examines all of the tissues removed, but it can be difficult to know beforehand whether the patient will have a lasting benefit from the surgery. Sometimes, we just get lucky. And sometimes, a new technique turns out to be the key.

Joseph, a 57-year-old man who ran a family-owned business, began losing weight and developed painless jaundice. He was sent to a major medical center for testing, where he was found to have a large tumor in the head of his pancreas. On his CT scan, the tumor looked like it was invading the main vein carrying blood to the liver, the portal vein (Figure 1). 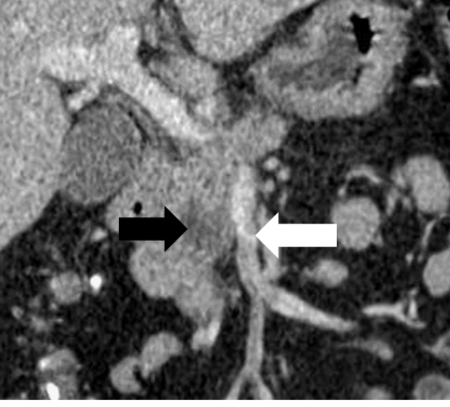 Figure 1. The CT image shows cancer in the head of the pancreas (black arrow) which lies immediately next to and possibly invading the portal vein (white arrow) carrying blood to the liver.

A CT-guided needle biopsy confirmed pancreatic cancer, and he was told that his condition was incurable. Joseph sought another opinion and was ultimately referred to me for an examination. He had been quite healthy and physically active prior to his illness, and although the tumor appeared large, there was no sign of enlarged lymph nodes or spread. After repeating all of his scans and blood tests, and finding no evidence of disease beyond the pancreas, I carefully explained to Joseph and his wife the plan for his treatment, and he agreed to undergo an attempt at removal of his tumor.

After he was put to sleep for the surgery, we prepared the left side of his neck in addition to his abdomen, in case we needed to harvest part of the jugular vein to replace or patch the vein adjacent to the tumor. When we divided the pancreatic neck during the Whipple procedure and rolled the head of the pancreas over to expose the area of the tumor, we saw that it did indeed invade the vein. We removed about 3 inches of the portal vein together with the tumor and replaced the missing segment with a piece of jugular vein harvested from his neck. The size match of the two veins was perfect.

He recovered uneventfully from the 10-hour surgery, and final pathology examination showed that despite the presence of a large pancreatic cancer with vein invasion, there was no evidence that the cancer had invaded the adjacent lymph nodes. He then began a course of adjuvant chemo- and radiation treatment, which had to be stopped prematurely due to symptoms of toxicity. He developed constant nausea and vomiting as well as high fevers during the chemotherapy and reluctantly agreed to stop the treatment. He returned home with a sense of dread that his cancer would soon return.

Follow-up examinations 6 months later showed no evidence of tumor recurrence, for which we were all grateful. Within a year after his surgery, he developed diabetes, but this was well controlled with insulin, and he resumed all his previous activities. A follow-up scan one year after surgery again showed no sign of cancer.

Three years went by, then five years, and still, no sign of cancer recurrence appeared. He returned for a follow-up visit, and we celebrated his five-year survival with his large family. Eight years after his surgery, he was seriously injured in a motor vehicle accident and was hospitalized for weeks due to rib fractures, a ruptured spleen, and other complications. At surgery for his spleen removal, no sign of cancer recurrence was seen. He eventually recovered from his injuries, and 17 years after his surgery, he was healthy, aside from his diabetes, and appeared to have been cured of his pancreatic cancer.

A Changing Definition of Resectability

Pancreatic cancer invading or involving the portal vein had for years been considered a sign of incurable disease. Although a few surgeons had reported successful attempts to remove or replace the portal vein during Whipple procedures, the patients did not survive very long so the procedure was not widely adopted. When surgeons found the cancer to have invaded the vein, they declared the tumor unresectable, meaning that attempted removal was both hazardous and futile. However, a few months before Joseph came to me, surgeons at MD Anderson Cancer Center described their experience with portal vein resection in a small number of patients who seemed to be good candidates for this more extensive operation (Leach article). They discovered that, contrary to everyone’s expectations, the patients did as well as patients who did not have portal vein invasion by their tumor, so long as all tumor tissue was removed. Joseph was my first patient in whom we considered and performed this procedure. His excellent outcome was partly due to the more extensive operation, but mostly due to the fact that his cancer was confined to the pancreas and had not begun to spread at the time of his surgery (Figure 2).

Figure 2. (Left panel) Artist’s depiction of a cancer (black arrow) invading the portal vein seen after the neck of the pancreas has been divided. (Right panel) Replacement of the removed portion of the portal vein with a vein graft harvested from another location.

I met with Joseph and his large family when I visited his city many years after his surgery. The joy and gratitude I shared with Joseph, his wife, his children, and grandchildren created one of the most wonderful experiences of my life. When I told him that he was the first patient in whom I had performed a portal vein resection with removal of a tumor, he smiled and said, “You mean, you experimented on me?”

Currently, about twenty percent of Whipple procedures for pancreatic cancer include resection and replacement of either the portal vein or the superior mesenteric vein which passes beneath the neck of the pancreas and feeds the portal vein. This has resulted in an increase in the number of long-term survivors – patients who achieve a good response from the surgery who otherwise would have been declared unresectable – and probably accounts for some of the small improvement in long term survival after surgery that has been seen over the past decade or so. Another reason for Joseph’s success was that in the weeks that passed from the time of his original diagnosis until he finally came to surgery, there had been no sign of progression of his disease. This meant that he was fortunate to have a slow-growing version of pancreatic cancer. Most patients are referred for possible surgery as soon as their cancer is found, and this includes patients with fast-growing and probably already-metastatic disease, as well as some, like Joseph, whose cancer cells have not yet begun to spread. So one important aspect of choosing the right treatment for the patient is to identify what kind of behavior that patient’s cancer is likely to demonstrate. We don’t currently know how to do this other than to watch the patient’s disease, with regular scans, to determine whether the disease is already beyond the ability of surgery to alter its course. Neo-adjuvant therapy is being used with increasing frequency before surgery, this allows on-going surveillance of the tumor while anti-tumor treatment is being given. If the tumor fails to progress or actually decreases in size, the subsequent surgery will probably be successful. If the tumor grows and spreads during the course of treatment, no surgery is indicated because the tumor has shown itself to be not localized.

There are several new approaches to identifying whether a tumor is already spreading to distant sites. One method is to look for circulating cancer cells in the bloodstream. The discovery of circulating tumor cells, or CTCs, was first made in breast cancer cases decades ago. The CTCs were hard to identify, however, and newer methods for the capturing of CTCs has only recently been possible through the use of advanced bioengineered devices. Most patients have circulating CTCs, and the surprise is that long-term “cures” are possible despite their presence. Current research studies are attempting to identify whether there is a threshold for their number which correlates with the outcome of treatment.

Another new approach is to detect the circulating tumor DNA or RNA which is shed from the cancer. Tumor cells breakdown and spill their proteins into the bloodstream, and the nucleic acid proteins can be captured and separated from normal cellular proteins. This allows an estimate of the state of the cancer by measuring how much of the shed tumor DNA or RNA is present. This approach seems likely to be helpful but studies are ongoing to determine what the exact criteria should be to define the extent of disease.

Another approach to identifying the likely course of a pancreatic cancer in a newly-diagnosed patient is to assay the genetic mutations of the tumor itself to identify its specific characteristics or phenotype. There are a dozen or more critical genes which are likely to be abnormal or mutated in every pancreatic cancer, but the pattern of these mutational combinations can vary widely from one patient to another. Identifying the exact pattern of these genetic abnormalities in each patient, and then prescribing a treatment which is “customized” to be most likely effective for that particular combination of features, is the essence of what is called “personalized medicine” or “precision medicine.” The approach has been successful for some cancers, such as breast cancer, and research is ongoing in patients with pancreatic cancer to determine if this approach will be successful for this disease. The approach of determining the individual patient’s genotype or the genetic profile of the tumor is a concept which is growing in acceptance, but technical issues such as the safe method to obtain sufficient amounts of the tumor to allow the testing and the scarcity of “actionable” mutations that can indicate a specific form of treatment of pancreatic cancer remain challenges with this approach. Joseph’s excellent outcome was impossible to predict before his surgery and serves as a reminder that an aggressive approach with this disease sometimes yields great benefits.