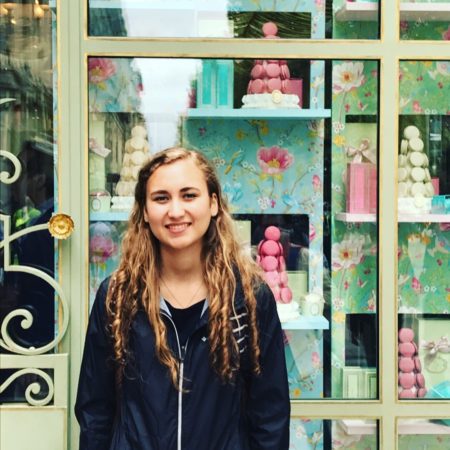 My name is Lindsey Fontenot, I’m 23 years old and live in Berkeley CA.

How old were you when you first had your first bout of pancreatitis?

I was 13 years old when I had my first attack. I was headed off for a field hockey camp at Stanford University. Unfortunately, I couldn’t play because I wasn’t feeling well. However, my parents now suspect I had bouts previous to that, just chalked up to a stomach bug or food poisoning.

What did you think it was initially and did your doctors know it was pancreatitis right away?

My doctor initially thought it could be from eating spicy chips or straining a stomach muscle from doing pull-ups. But I had a gut feeling it was a little something more. At that time I knew nothing about pancreatitis (let alone how to pronounce it!) so I definitely didn’t think it was that. My labs came back with elevated amylase and lipase. So my pediatrician ordered additional labs and an ultrasound. I was then referred to a pediatric GI. 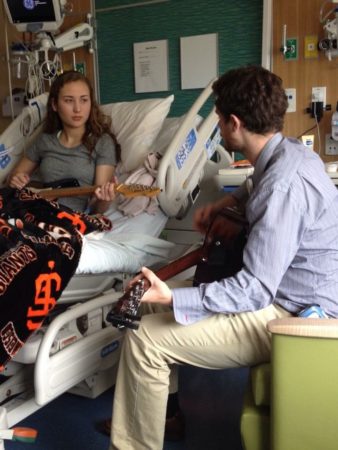 Lindsey learning to play the guitar during one of her hospital stays.

How often were your hospital stays?

They started off infrequent and then began to occur monthly. It would also take me longer to recover as each one happened. As things got worse, I needed a PICC line for nutrition to recover from each attack.

Can you tell us what your life was like before pancreatitis?

I had lots of energy and loved being outside. I played many different sports before pancreatitis. In my freshman year of high school, I played field hockey, soccer, and rowed crew. The summer after my freshman year, I was diagnosed. I was able to play one season of field hockey but then had to stop all sports.  High school was a tough period for me. I was often missing class and studying/ taking exams with the hospital school teachers. I missed out on so many parties, holidays, school dances, and more. I had to leave a summer camp early due to an attack. I had a couple of close friends that really tried to understand and would frequently visit me in the hospital, which was such a nice escape for me. When I was feeling well enough and could attend birthday parties or other events, I had to be very careful about what I ate while out. Twice, I had a cheeseburger at parties/events and ended up in the hospital with a flare. So, we then cut out red meat from my diet and I had to watch what I ate when I went out with friends. Some didn’t quite understand why I was out of school so often or couldn’t eat certain things, and it was hard trying to explain to them (or even bring it up).

What was the main factor in the TPIAT surgery and how was the process?

The biggest factor was gaining back my quality of life, away from the hospital. Being able to eat pain-free was the main goal for me. I had three ERCPs before the Total Pancreatectomy with Islet Auto Transplantation (TPIAT), but no other surgeries. I got my TPIAT done at UCSF Benioff Children’s Hospital in San Francisco. I was receiving my GI care there for pancreatitis, so thankfully we didn’t have to travel anywhere for the surgery. I was a strange mix of nervous (such a big surgery) and excited (to get my life back on track). At that point though, I was in so much pain and couldn’t eat, so the actual operation itself didn’t seem that daunting. Unfortunately, because I was only the third or fourth pediatric patient (and the first one in many years), I wasn’t connected to anyone nearby. However, my parents were able to connect with many others who previously had the TPIAT via an online support group on Facebook. Talking to others about what to expect and hearing multiple different experiences was extremely helpful for me. Everyone’s recovery is a little different, but getting some info on the general procedure and recovery helped put me at ease. I also had a great nurse practitioner who walked me through everything from getting a GJ tube to being on insulin afterward. 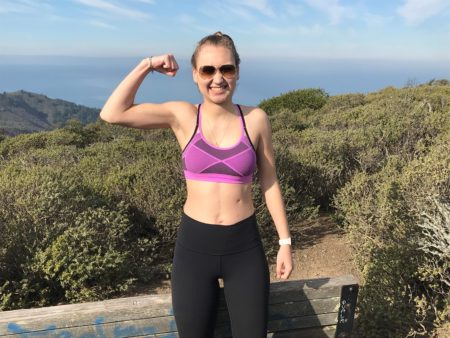 It was pretty tough, but the worst part only lasted a few weeks. After that, I was really tired from the meds so slept a lot. We paused my schooling for about a year to focus on getting stronger, weaning off pain meds, and eating normally again. There were some complications that came up along the way, but I never regretted the surgery in spite of those small, temporary roadblocks.

Any illness will take a toll on you mentally and physically. For kids that are living with pancreatitis as well, what piece(s) of advice would you tell them to help them get through this?

Find your outlet during this time. It may be different from what you’re used to doing, but you have to discover that escape for when you’re in pain/hospitalized for long periods of time. Don’t worry about losing friends because you’re out of school or miss social events often. Your real friends will understand and stick by you. And as easy as it is to feel sad and frustrated about how unfair the situation is, there will come an end to the pain and frequent hospital stays, so stay positive and push onward.

For you personally, what has helped you the most through your journey? 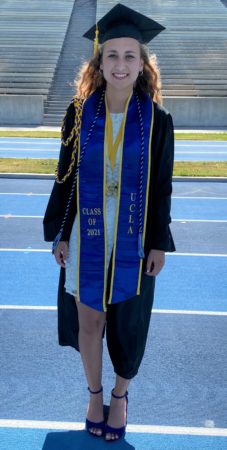 Lindsey at her graduation in 2021

My family and friends were a huge source of support for me. I always had company in the hospital, whether it was my parents being there for rounds and spending the nights with me or my friends visiting after school to cheer me up. We would paint nails, watch movies, play board games. Anything really for me to forget where I was at. After having to quit sports and spending loads of time in the hospital, I picked up reading and painting. I also spent a lot of time with the hospital’s music therapist and learned to play the guitar. All of these distractions really helped me get through tough times both before and after surgery.

How are you feeling now? And how is your life now post-TPIAT?

I feel great! I still have small things I have to look out for (like low blood sugar or anemia), but these are such small problems compared to my life before. I graduated from UCLA this past spring (‘21) with a degree in Microbiology, Immunology, and Molecular Genetics. I just started my PhD program at UC Berkeley in Metabolic Biology. I’m excited to start working in a lab that’s researching pancreatic beta-cell transplantation next spring. Definitely a topic near to my heart.

How did you learn about the National Pancreas Foundation?

I actually reached out while in college because I wanted to start a club that raised awareness and funds for pancreatic diseases. So I got in touch and established the National Pancreas Foundation at UCLA. Unfortunately, shortly after the club was founded, COVID hit and many of our plans had to be canceled. But I hope to continue working on raising awareness for pancreatic diseases through different means now that I’ve graduated.