Long-term use of aspirin may reduce risk for pancreatic cancer 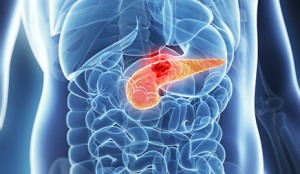 Continual use of low-dose or regular-dose aspirin may cut a person’s risk of developing pancreatic cancer in half, a Yale School of Public Health and Yale Cancer Center study has found. Further, the degree of protection may grow the longer one takes the aspirin. The study appears in the journal Cancer Epidemiology, Biomarkers & Prevention.

Pancreatic cancer is among the deadliest cancers, with the five-year survival rate at less than 5%. By the time it is diagnosed, it is usually too late to treat successfully.

The Yale researchers collected data from a Connecticut population study of 362 newly diagnosed pancreatic cancer patients and a control group of 690 disease-free people. They analyzed associations between risk of pancreatic cancer and past aspirin use.

The study, which took place from 2005 to 2009, looked at regular use of both low-dose aspirin (75 to 325 mg. per day, taken for heart disease prevention) and regular-dose aspirin (325 to 1,200 mg. taken for pain or anti-inflammation purposes). Overall, both low-dose and regular-dose aspirin reduced the risk for developing pancreatic cancer by half. Significantly, among those who took aspirin for more than 10 years, the risk reduction was even higher — 60%.

A great deal of research has been published on the relationship between aspirin use, and reduced risk of cardiovascular disease and overall cancer incidence and mortality. However, the specific association between the type of aspirin used (low-dose or regular), the time that aspirin use began, duration of aspirin use, and the development of pancreatic cancer was unclear.

“It can take 10 to 15 years after the initial stages of pancreatic cancer for the disease to be diagnosed,” said senior author Harvey Risch, M.D., Ph.D., professor of epidemiology at Yale School of Public Health. “So we needed to see what people took that far back in time. We considered low-dose aspirin because it has been in common use for so long, and could have been taken that far in the past.”

Risch says more research must be done, but noted some theories about why the association between aspirin and reduced pancreatic cancer risk may exist. “Aspirin has anti-inflammatory properties, and if pancreatic cancer starts by low-level chronic inflammation that causes some pancreas cells to lose genetic control and become cancerous, then aspirin’s effect on reducing inflammation would be beneficial,” he explained.