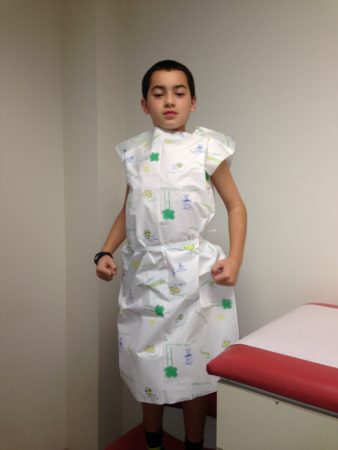 Michael*, 16, was just 3-years-old when he was diagnosed with pancreatitis. Michael and his Mom share his pancreatitis story through the lens of a patient and caregiver.

How old was your son when he was diagnosed? What were the initial symptoms? Michael was 3-years-old. He had no fever, threw up and had been feeling ill for several days.  When we could not control his pain with Children’s Tylenol or Advil, my husband (a physician) thought we should have labs done to make sure his amylase and lipase levels were within the normal range just to rule out pancreatitis.  We were shocked and horrified to see the results confirm Michael did have pancreatitis.  Receiving this diagnosis helped explain so much of Michael’s behavior since birth, however, it was sad for us to realize that he had been suffering with the pain due to pancreatitis since birth and we did not know.

Did the doctors initially tell you it was pancreatitis? No, in fact he was diagnosed with colic as a baby when he cried constantly, and then as a toddler before he could verbalize his pain, he was diagnosed with strep, the stomach flu or food poisoning. It was only when Michael could describe his pain, that my husband got the idea that he should be tested for pancreatitis.  The pediatricians were very accommodating and agreed to our request but did not initially think to test for this or suspect pancreatitis as a possible cause of Michael’s discomfort, which is entirely reasonable since pancreatitis in children is extremely rare.

Pancreatitis is still not well known, even among the medical community. What are some questions that doctors have asked you that reflect this? Someone asked my husband, “How long has your son been an alcoholic?”

Michael:  If I can eat real food.

How has Michael’s life been different? What are some adjustments that he has had to make due to pancreatitis? When Michael was younger, pancreatitis dominated his life. He had frequent episodes that required hospitalizations and at that time it was recommended that patients not eat or drink anything during an episode (this protocol has changed).  Much of his childhood, we remember managing his diet and having to explain to preschool and early elementary school teachers and parents at every back to school night that Michael’s pancreatitis was not contagious and he posed no risk to his teachers or his classmates.  We always offered copies of the NPF patient education materials and sent a link to the NPF animated pancreas patient video for teachers and parents to learn more about the disease.

Michael:  I can’t eat a lot of fat so I have to be careful when I’m at a party or something.  Eating in smaller portions and no fried food.  I used to think about it a lot and worry but not anymore. 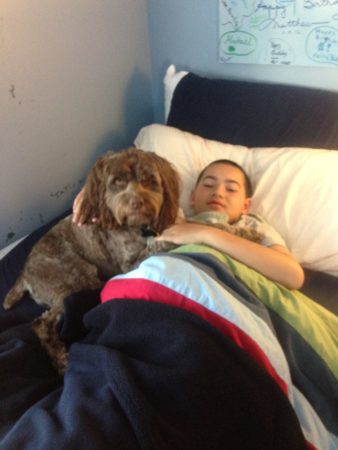 What do you wish people understood about pancreatitis? That it’s unpredictable. We don’t know when Michael will have an episode or how long it will last or how frequent the episodes will be.  We wish people could feel the pain for just a minute to understand how painful it is.  We also wish people understood that children can have pancreatitis for a variety of reasons, such as an accident or in Michael’s case, a genetic mutation.

Michael: It’s a genetic defect and not contagious.

What provides you strength during the tough times during his attacks?  Support and help from family have sustained us during Michael’s episodes. When Michael was frequently ill and in and out of the hospital in his younger elementary years, the care packages and cards from his classmates and kind text messages to me from other parents and friends to just check on us was really heartwarming and helped us feel like we’re still connected to our “regular” life.

What advice would you provide to other parents that are going through this? As a parent and primary caregiver during Michael’s episodes, I’ve learned to keep a diary of the medication we give Michael with the time and amount given and to record his pain on a 0-10 scale so I can communicate this to the doctors over the phone if we were trying to manage an episode from home. During Michael’s hospitalizations, I learned that you are still the primary caregiver and advocate for your child’s care, which is particularly important during nurse shift changes or other transitions.  For example, keep track of when medications are given and when they should be administered to make sure the schedule isn’t disrupted. 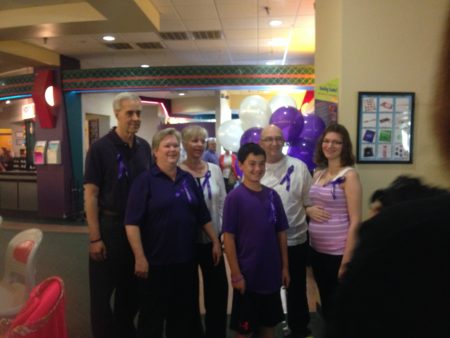 What made you decide to be active with the National Pancreas Foundation? I found the NPF during Michael’s first hospitalization when I was trying to find resources to understand and learn more about pancreatitis in children.  We recommend the NPF resources to people who ask about pancreatitis and we have remained tangentially connected to the NPF since Michael’s diagnosis, whether we attend an NPF Bowling event or volunteer in another capacity.

Anything else you would like to add? We are so lucky to have a great medical center where we live and feel very comfortable with Michael’s GI doctor there. However, we did seek out additional opinions about Michael’s prognosis when he was younger at UPMC, which is how we were able to identify the gene mutation that causes Michael’s pancreatitis.  Expanding Michael’s care to include other specialist opinions and recommendations gave us the confidence in the decisions we were making for Michael.

Michael:  It will be concerning at first but after a few episodes, you realize what you can and can’t eat and what portion sizes work for you.  During an episode drink and rest a lot and know it will get better and you will get through it.

*Not his real name