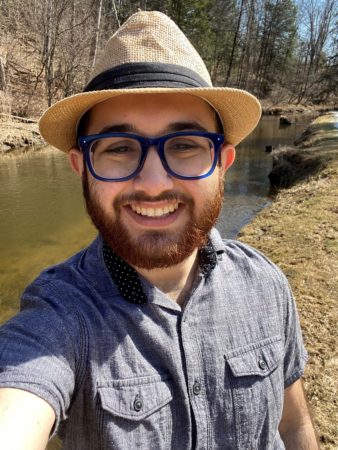 My name is Monroe and I am a 25-year-old from NY, USA. My journey with pancreatitis began in May 2021, when I woke up Sunday, May 16th with what I thought was horrible heartburn. I kept telling my fiancee who was at work, that I would stop by to see her once the pain went away. The pain kept getting worse though, even with Tylenol and I could not eat or drink and eventually began to throw up from the pain. After much debate, I went to urgent care, where they tested me for COVID just in case, but thought it was a random virus since I did report severe diarrhea and mild fever days prior that I at the time attributed to food poisoning since it went away so quickly. I never got to pick up the medication urgent care prescribed me since I ended up in the ER a few hours later as the pain and throwing up got worse and worse. I have had undiagnosed chronic health issues for years and am used to being dismissed by healthcare, so I was very worried they would not find anything wrong with me despite being in the worst pain I ever have experienced. I was actually shocked when they found an answer so quickly that when the healthcare worker said I had “pancreatitis” I replied “what?” since I never heard of that before but mainly there was an explanation for my symptoms!

Unfortunately, I was in the hospital for eight days given my lipase levels upon arriving at the ER was over 21,000 and that my liver levels and WBC were being whacky! The ileus that developed (meaning that my bowel movements stopped) did not help either and added to the pain and discomfort. My case was labeled as idiopathic but potentially attributed to a psychiatric medication I had been on for a few months (and was stopped upon doctors realizing the rare instances of it being linked to pancreatitis).

The diet has been a struggle – I still am trying to improve on adhering more strictly to eating low-fat, but was recently provided the “Healthy Family Recipes for Pancreas Disease” cookbook. I had a second attack in late July where the ER showed my lipase had risen to over 4,000 (while in early June when they were last tested, they were under 1,000). It is possible that something triggered my pancreas before it fully healed from the first attack. Luckily, I got to recover at home this time, and the pain went away faster than the first time.

My experience with pancreatitis is the only reason I am aware of what this disease is, despite it not being uncommon and having a Masters of Public Health. Oddly enough, I remembered seeing a Facebook post by a friend who was in the hospital shortly before I was, also with idiopathic acute pancreatitis. Everyone I told had never heard of the disease before. We are taught from a young age about many types of disorders and their preventative measures, such as heart disease and liver disease, and I want to help increase the amount of pancreatitis education and awareness which is why I am glad I learned about the National Pancreas Foundation.