From Patient to Advocate – Barbara’s Story

It all started as a child! I never knew why every time I was stressed or excited, which was a lot with a family of six children, a great Mom, and an alcoholic father, I would have these bad belly aches, nausea, and vomiting. It would happen during book reports in front of the class, holidays, birthday parties, teenage parties, dating, weddings, funerals, and Church functions – I was always having pain, nausea, and vomiting. At first, my Mom said it was a sensitive stomach, and most of the time I did not want to worry her, because Dad did that enough, so I would just hide in my bed and cry. 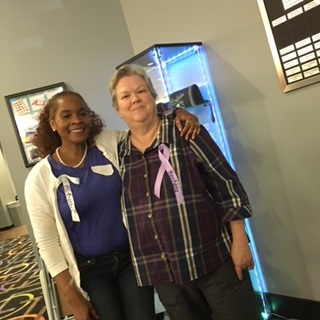 Years passed and I was married at a young age, blessed with four children, a great career in Nuclear Document Management, but still having off and on attacks. I went to the ER when attacks were terrible, ER would just ask about how much alcohol I drank or used to drink. They would say I have pancreatitis, give me a bag of fluids, pain and nausea meds and send me home. They treated me as though I was lying when I said I had not drank alcohol! I vowed I would never drink after the way my daddy acted and I sure never did! Life went on and on, so did the attacks.

In 2010, I was traveling with my job and it became extremely stressful.  One morning I left for work, but I was in so much pain, I went to the nearby ER. I was admitted for pancreatitis, spent a week in the hospital, was out 10 days, readmitted for another week, out a week, and then for a third week, all in less than six weeks! The doctors knew I had pancreatitis, but did not know why. I had numerous CT scans, EUS, ERCPs, balloon openings of my ducts, stents in the ducts, and a major surgery to surgically open the ducts of the pancreas – none of which helped. I went from my local hospitals to being referred to Baptist Hospital, Duke, then John Hopkins, and finally the University of Minnesota, where the specialist said my pancreas was badly diseased and had been diseased all my life! I needed surgery to remove the pancreas and transplant the insulin cells in my liver. Just this past visit I was told that due to the disease, I now have cirrhosis of the liver! Now that I have Medicare, they will pay to remove the diseased pancreas, but not the islet transplant, however, for the last couple of years, they paid for me to be hospitalized once or twice a month for a four-seven-day attack.

All the years I had insurance thru my employer, and for the first couple of years on disability, I paid over $600 a month for Cobra coverage on just myself.  I spent all my savings and never received a proper diagnoses or treatment plan, until a couple of years on Medicare. Also, after all my life of dealing with this disease, four children, 11 grandchildren later, they told me it is hereditary! I realized even before the positive gene testing it was hereditary, because my two daughters and several grandchildren have issues like I always had.

I started the NC Chapter of the NPF a few years ago when I learned that the cause is hereditary. I feel God wants me to make good out of all I have been thru, so I do my best to raise awareness, educate medical staff that this disease is not always, hardly ever, an alcoholic disease, advocate for better treatment at the ER/hospital and raise money for research/cure!