One of the reasons that the Whipple operation is so complex is that the anatomy is never exactly the same from one person to the next. Minor variations are discovered frequently, and major abnormalities are rare but can have dire consequences if they are not recognized.

Peter was a 63-year-old man with a history of recurrent pancreatitis, which was thought to be due to alcohol abuse. He developed persistent abdominal pain, which was worse after eating, and his doctor was concerned that something had changed. X-ray studies revealed abnormalities typical of scarring of the pancreas, which was consistent with a diagnosis of chronic pancreatitis. His symptoms had abruptly worsened, despite his having abstained from alcohol for years, and so an endoscopic injection of x-ray contrast into the pancreatic duct (by endoscopic retrograde cholangio-pancreatography or ERCP) revealed a stricture or narrowing of the pancreatic duct in the head of the pancreas. The stricture was treated endoscopically with the insertion of multiple stents (narrow flexible catheters that act as a wedge to prop open or stretch an area of narrowing). The stents themselves can cause inflammation and scarring if they are left in the pancreatic duct for a long time, and so they are usually deployed for only limited periods, such as two to three months. Peter’s symptoms improved after the stenting procedures but always recurred after the stents were removed. Cancer can cause a stricture of the duct just as scar formation, but the biopsies of Peter’s stricture showed only scarring. However, molecular studies of the biopsied tissue were performed and revealed that the stricture contained a mutation of a gene known as K-ras, which is present in over 90% of pancreatic cancers. Therefore, he was referred to me for a pylorus-sparing Whipple procedure because of the suspicion that he harbored an early-stage malignancy that was somehow being missed on the tiny endoscopic biopsies.

Peter’s extended family was well known in our city. His grandson was a classmate of my daughter’s, and his family was well established in the community. I was honored to have him referred to me for the surgery. I explained that our plan to remove the pancreas’ suspicious area was the best chance we could have to prevent him from suffering a bad outcome from an occult cancer.

An unusual anatomic finding is discovered at surgery
At surgery, no obvious signs of malignancy were present, although the gland was densely scarred. The normal pancreas feels like raw fish, but Peter’s felt like tough gristle. The operation proceeded smoothly until we noticed what appeared to be an extra or auxiliary artery coursing next to the bile duct up into the liver. This was in addition to normal-app
earing right and left hepatic arteries going to the liver, which were preserved. The auxiliary artery was removed as it was inseparable from the head of the pancreas.

Post-operatively, Peter recovered uneventfully and was discharged home on the 8th day after the operation. One week later, however, he returned to the clinic with fever and jaundice. A CT scan showed that a large part of the liver’s right lobe was infarcted, or dead, due to loss of its blood supply and was replaced by an abscess. He became septic when the infection invaded his blood-stream. A drain was placed into the liver abscess, but his condition deteriorated further. He underwent emergency surgery to drain the abscess and remove dead liver tissue, but he developed progressive liver failure, worsening blood-stream infection, and shock and died despite intensive care. Microscopic examination of the pancreas showed only scar tissue but no sign of cancer.

Failure to appreciate the importance of the abnormal finding
The auxiliary artery was actually the predominant artery supplying a major portion of the liver’s right lobe and arose from the superior mesenteric artery underneath the pancreas (Figure 1). Despite the presence of what appeared to be normal arteries supplying the right and left lobes of his liver, Peter’s right hepatic lobe was partially dependent on the unusual 3rd artery for its blood supply, and removing the artery resulted in infarction of the liver. The infarcted tissue became infected, resulting in abscess formation, sepsis, and death.

At the time of Peter’s operation, the routine use of a pre-operative study of the vascular system, or arteriogram, was advocated by some surgeons who had experienced just such a complication, but it was not routine practice due to the extra expense, pain, and risk of arteriograms which require a puncture of a peripheral artery and then the threading of a catheter to map the course of selected arteries. Surgeons relied instead on manually confirming the presence of normal arterial inflow by tracing the pulse of an artery with a finger before removing anything. In this case, despite what appeared to be an adequate blood supply and palpable pulses from the right and left hepatic arteries, which we felt in the operation, the rare anomaly of an extra or accessory right hepatic artery resulted in a tragic and preventable loss.

The experience of misinterpreting blood vessel anatomy during a complicated operation is a surgeon’s worst nightmare. I was devastated, Peter’s family was devastated, and his referring physician was devastated.
As I told all patients before the Whipple operation, I had explained to Peter and his family that there was a 2% chance that he wouldn’t survive the operation. But it is a horrible outcome when the 2% risk becomes a 100% reality. When the disease itself causes the death, it is somehow more tolerable; we are literally fighting to overcome a killer. When my own error in recognizing the abnormal vascular pattern caused his death, I was the killer, not his disease.

Improved imaging methods have eliminated this source of error
Within a year or two of Peter’s death, CT imaging technology advanced to provide precise non-invasive imaging of blood vessels and to depict those vessels in multiple views or perspectives (Figure 2). This provides a detailed pre-operative map of blood vessel abnormalities and other features and has virtually eliminated Peter’s tragic and avoidable complication. All patients treated at major pancreatic surgery centers now undergo these special multi-detector CT-angio scans. When an abnormal artery is identified and appears to be an important vessel, we can graft it onto another artery to provide continued blood flow to the area it serves. 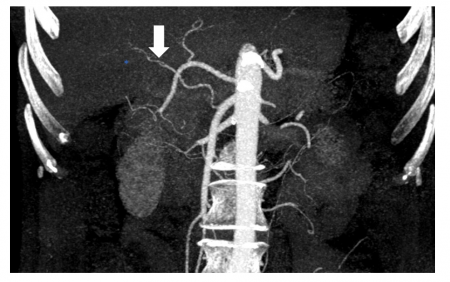 Peter’s tragedy was compounded by the fact that he didn’t have cancer; his fatal complication was the result of a radical operation that didn’t need to be performed. As a result of his case and that of other patients with chronic pancreatitis, we learned that K-ras mutations do not inevitably indicate the presence of cancerous tissue. Although most pancreatic cancers contain K-ras mutations, so do many patients with chronic pancreatitis or pre-malignant changes in the pancreatic ducts. In other words, the presence of a K-ras mutation is not the same as a diagnosis of pancreatic cancer.

Pancreatic pathologists have decoded the sequence of mutations. They have correlated the sequence with the step-wise changes in the cells that line the pancreatic ducts and characterize the progression from normal to cancer. This system of grading the cellular architecture of the ducts is termed pancreatic intraductal neoplasia, or PanIN. The earliest change in ductal cell architecture is called PanIN 1, whereas architecture graded as PanIN 3 is one step before invasive cancer. Because pancreatic cancer is such a devastating malignancy, pancreatic resection is now considered when it is known that the pancreas harbors PanIN 3 changes in the ducts.

Searching for a microscopic abnormality
The problem is, PanIN 3 lesions are invisible on imaging studies such as CT scans, MRI, and even EUS. They can only be seen under a microscope. Once a PanIN 3 lesion or a cancer is suspected, biopsy confirmation of the diagnosis is needed. Unfortunately, it is difficult to obtain a sufficient biopsy of the pancreas short of surgical removal to permit an evaluation of the PanIN grade of the ducts. Unlike colonoscopy, it is technically very challenging to obtain an endoscopic biopsy of the pancreas sufficient in size to permit an analysis of the ductal tissue. Needle biopsies of the pancreas are safer and easier to perform but seldom yield enough tissue to permit PanIN grading of the ducts. Newer methods for detecting PanIN 3 tissues are being studied in animals with induced or transplanted pancreatic cancer, and clinical tests in patients of these newer imaging methods are underway. These advances, however, are still a few years away from being widely available for patients.

Another concern is that, like disseminated carcinoma in situ or DCIS of the breast, PanIN 3 lesions may persist for years without progressing to the stage of invasive carcinoma. The decision to operate on DCIS of the breast is a frequent subject of discussion among breast surgeons and oncologists, but the risk of surgery is low. In pancreatic surgery, the risk of complications is high, and there is a modest but significant risk of death. So the decision of whether to recommend removal of a pre-cancerous lesion in the pancreas is much more complicated.

In Peter’s case, all we had was a molecular clue that his risk of harboring a cancer was greatly increased. Therefore, we decided to perform surgery based on the suspicion, but no proof, that a cancer existed. Medicine, and surgery in particular, sometimes requires a decision to treat a patient despite incomplete or inadequate information. Using one’s “best judgment” means trusting that the “best” judgment will be the right judgment. Peter’s death was poignant proof that the best judgment is sometimes fatally flawed.