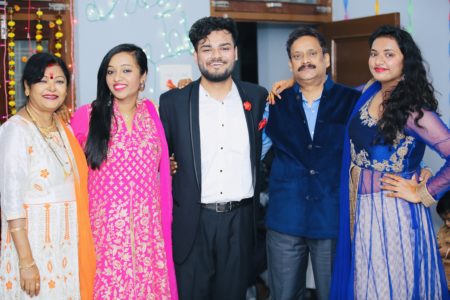 Priyesh with his family

It was an early morning of October 27, 2014, when I had my first attack of pancreatitis. I was 18 years old and didn’t know at that moment that it was a pancreatitis attack. The pain was so excruciating that it had woken me up from my nap. It was focused in and around my upper abdomen and making me nauseous. I was an hour away from reaching my destination in Kota, Rajasthan where I was traveling from home after the Diwali holidays to attend my medical school prep classes. I planning to take my medical entrance examinations the following year. I called up my father, who is a physician, and asked him what to do. He asked me if I had eaten anything in the past 24 hours which could upset my stomach. I did have pizza with a friend the previous day, which he and I assumed could be causing the pain in my stomach.

I carried my luggage and took the cab to my hostel in pain and hurriedly took some medicine for gas and nausea hoping the pain would go away. But it didn’t. After lying down in my bed for about an hour in agonizing pain, I called up my eldest sister, who is also a general practitioner. She advised me to quickly get an ultrasound done. Luckily, there was a radio diagnostic center within walking distance from my hostel. Once I arrived there and waited for the doctor to do the scan, he made the diagnosis. My pancreas was severely inflamed. I’m forever thankful for that experienced doctor who diagnosed it correctly and swiftly decided to admit me to a nearby hospital dedicated to gastroenterology. I was admitted to the ICU and was hooked with oxygen, pain killers, IV fluids, and a nasogastric tube for three to four days. Upon admission the doctor had surprisingly asked me if I drink alcohol and funny enough, I haven’t had ever drunk alcohol in my life, and now I cannot drink at all! 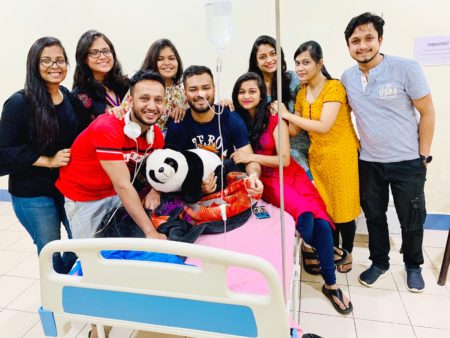 Priyesh with his friends during his first pancreatitis attack

My parents had arrived by then and  I received a CT scan and all kinds of blood panel tests done to rule out the possible causes but nothing was found. My doctors presumed that it must have been a fat-rich diet that might have triggered the pain. I was advised to restrict my diet quantity and quality accordingly. I was discharged 10 days later and had to leave my prep classes and come back home where I would prepare for my examinations. My parents took good care of me and made me eat home-cooked food and avoid junk food.

Honestly speaking, after informing my parents about all this, I had to Google pancreatitis to learn and gather a rough picture of what was going on. I was totally confused and just wanted the pain to go away. My parents who are both doctors, later told me that they had been very scared and were imagining the worst of the worst. I had one minor pain attack in the month of December in 2014, where my father took care of me at home. He put me on NPO and IV fluids for three days along with the pain injection of TREMADOL and that pain would subside. I was back to normal soon.

In 2015, I had another pancreatitis attack a night before my birthday on May 6th. That night, I saw my father cry seeing me in pain. I had never seen him feel so helpless. I contacted my school friend whose father is a gastroenterologist. We met up and got an MRCP scan done which showed the narrowing of my pancreatic ducts. He referred me to the Asian Institute of Gasterenteroly in Hyderabad, Telangana. My family and I visited the hospital a month later where I got my endoscopic ultrasound done along with a genetic test. EUS didn’t show any anomaly thankfully, but only some calculi in my parenchyma tissue of the pancreas and narrowing of the ducts due to recurrent pancreatitis attacks. The genetic tests also came back normal, meaning I didn’t have any positive genetic markers. So, the doctor diagnosed me with early-onset idiopathic chronic pancreatitis. I received a prescription for protein pump inhibitors to be taken before my breakfast every day and an enzyme supplement capsule which I take in between every meal. I was advised to be on a diet of small and frequent meals. I also take antioxidant tablets every single day as well. 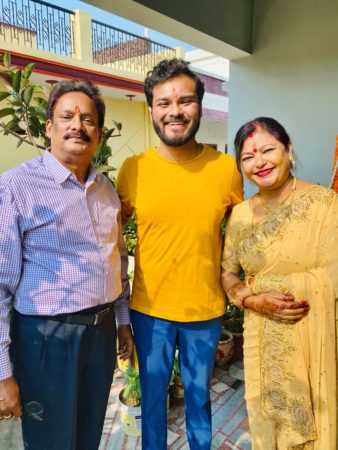 Priyesh with his parents

I would have bouts of such pain attacks, again and again, every year. My family and I managed to realize that certain factors were there which would trigger my pain, like exam stress, fatty or oily fried food, long days of traveling, and being on an empty stomach for extended periods. I got a prescription for anti-anxiety and anti-depressants to manage my stress. After taking two gap years, I finally received admission to a medical school in 2016. My family is made up of mostly doctors. I’m lucky to be surrounded by such resilient and hard-working people who’ve always supported me and help me stay strong every step of the way; be it academically, socially, or emotionally.

I used to eat every single delicacy available to me before my pancreatitis and weighed around 90 kg (198 lbs)! Now, I do not weigh more than 70 kg (154 lbs) and manage to stay fit physically and mentally with the support of my family and close friends. I cook my food by myself, or outsource it to a very kind lady living on my college campus, who cooks healthy home-style meals for me. It is hard to stay positive and not give in to the cravings for oil and fat-rich food when it is eaten by everyone around you. While traveling, visiting malls, going out with friends to a restaurant or cafe, oil and fat-rich food is served everywhere. It is tough to find healthier options outside. People my age drink alcohol, smoke, eat pizza, burgers, chips, etc, but I cannot and I won’t. It has taken a very long time for me to be in this evolved space where I feel confident to be able to cook for myself and not feel disheartened on seeing other people enjoying the food which I can’t eat. In India, people extensively use oil as a cooking medium to give flavor at different stages of cooking. However, I have realized that the same flavor can be infused into the food using modern cooking techniques such as air frying, baking, and steaming.

Not everyone is blessed with everything in life. If I have lost something, I have also gained something. I am privileged enough to have access to good doctors, expensive medications, health insurance to cover my hospital visits, and most importantly, the people who have comforted me in my sick days. Today, after six years of chronic pancreatitis, my pancreas hasn’t changed its physiology much. There haven’t been any complications such as duct obstruction, calcification, fibrosis, or necrosis yet. I hope my continuous effort towards making healthy lifestyle choices keep my pancreas healthy forever! 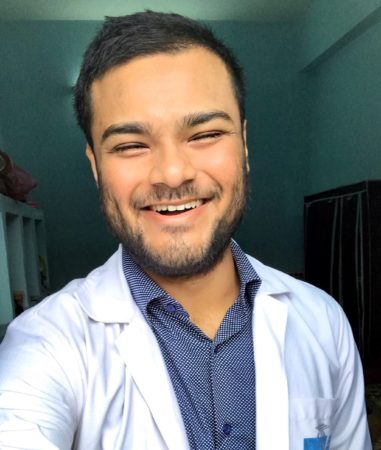 If I have to share any lessons that I have learned through this ongoing journey, I would tell anybody struggling with chronic illness such as pancreatitis, to learn to be self-reliant as much as possible. Do not expect others to stick with you in helping you fight your demons. Learn tricks and ways to survive and live every single day. We all have to stand up for ourselves and demand what we deserve. Never shy from saying no to your friends and colleagues. Find your support system which makes you feel welcomed and included. Commit to lifelong learning. I’m forever grateful to my parents who have helped me become confident and happy with my own body. I’m grateful for my loved ones who always inspire me to be a better person every day. I’m also grateful to the National Pancreas Foundation, which works tirelessly to educate people about the ongoing research and developments with respect to the pancreas and its pathology. They give a platform to share and amplify the stories of people like me. I have even made a couple of friends through the Instagram page of NPF whose inspiring stories help me stay strong and never lose hope. When we know better, we do better.

Today I’m a 24 years old medical student, studying to become a doctor soon. I hope to become an empathetic, kind, passionate professional who listens and cares for his patients.