In addition to a strong family history of pancreatic cancer, there are a variety of factors which increase the risk of developing the disease. Obesity and long-standing diabetes both appear to double the risk of developing pancreatic cancer. A history of chronic pancreatitis, a progressive inflammation, and scarring of the pancreas, increases the risk still further. Developing type 3c diabetes as a consequence of the chronic pancreatitis increases the risk even more.

Rufus was a farmer in his mid-60s who was referred to me after several episodes of abdominal pain prompted his doctor to obtain a CT scan. The scan revealed an egg-sized tumor in the tail of his pancreas but no other sign of disease. He had been a heavy drinker in his younger years but had not drunk alcohol, according to him and his wife, for many years. He stopped drinking after suffering recurrent bouts of acute pancreatitis, and despite his abstinence from alcohol, had developed evidence of progressive chronic pancreatitis, including diabetes and pancreatic enzyme insufficiency. His type 3c diabetes was initially managed with standard diabetes medications. Still, his blood sugar levels and hemoglobin A1C remained high, so his doctor prescribed one of the newer diabetes drugs, a pill which blocked the breakdown of an intestinal hormone that normally increases insulin release after meals. With the addition of this new medication, an inhibitor of an enzyme called DPP-4, Rufus’s diabetes came under better control.

One look at Rufus made it clear why his doctor was having trouble controlling the diabetes, as the patient was a big fellow with a very prominent belly. He loved to eat and loved to cook – he made his own sausage – and didn’t seem the type to be obsessed with tight glucose control. He was clearly concerned, however, when an endoscopic ultrasound-guided fine-needle aspiration of the tumor revealed that he had a pancreatic ductal adenocarcinoma (PDAC), the most common pancreatic cancer.

Most pancreatic cancers occur in the head of the pancreas, and only about 25% occur in the body and tail, where they are typically at a more advanced stage when they are first diagnosed. These tumors grow to an advanced stage without producing much in the way of symptoms, and it is rare for a cancer in this location to be truly localized – without distant spread – and therefore removable for a cure. Some pancreatic surgeons refuse to operate on a cancer in the pancreatic tail because they are so rarely curable. Rufus’s CT scan didn’t show any evidence of distant spread to the liver or anywhere else, but I explained that we would begin the surgery with a diagnostic laparoscopy, inserting a laparoscope through a tiny incision, to look for metastatic disease before embarking on a big operation. If the laparoscopy showed no sign of tumor spread, we would then proceed with an attempt to remove the cancer in the tail of the pancreas.

Rufus and his wife agreed, and at the time of surgery, laparoscopy revealed normal-appearing intra-abdominal contents, including the underside and front surface of the liver, a likely site for metastases. After “breaking scrub” to tell his wife that we were good to proceed, the laparoscope was removed, and a transverse or “bucket-handle” incision was made across his big abdomen to allow me to gain access to the body and tail of the pancreas.

The operation began by assessing the region of the tumor to feel for fixation or attachment of the tumor to structures behind it (something that is difficult to tell from the CT scan). Also, a routine maneuver is performed in which the surgeon sweeps his or her hand over the dome of the liver to feel for any lumps or “seeds” that might indicate metastatic disease. The tumor in the distal pancreas was easy to see and access and appeared to be mobile or not fixed to the surrounding tissues; I could “rock it” gently back and forth with little resistance. When I swept my hand over the top of the dome of his liver, however, I felt two little bumps that were too far over the “horizon” of the dome to have been seen by the laparoscope. With some effort, we were able to retract the liver enough to get a look at them, and there appeared two white spots that looked like fuzzy little sesame seeds (Figure 1). We biopsied one and gave it to the pathologist, who immediately did a frozen section, a rapid method to freeze, cut, and stain the tissue so it could be examined under the microscope. Within minutes, we knew it was metastatic pancreatic cancer. 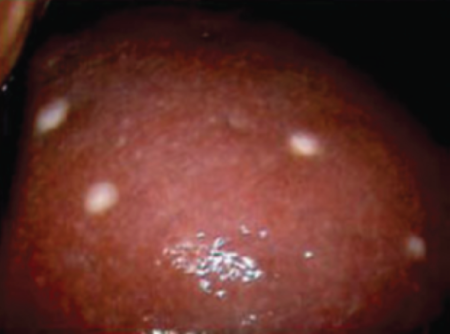 Figure 1. Typical deposits of metastatic pancreatic cancer appearing as pale “seeds” on the surface of the liver.

The process of sweeping my hand over the smooth liver and feeling the slick lining of the diaphragm was a maneuver I had performed hundreds of times before. It was such a normal part of performing a cancer operation that I did it automatically; it was one of those steps that a surgeon never omits. When I felt those little buds of metastatic disease, my heart sank for Rufus. I was also annoyed that the laparoscopy had failed to detect this hidden sign of advanced disease. To have proceeded with a removal of the cancer would have been futile because Rufus could not be cured of this disease, and it would put him at risk of complications of a big operation with no hope of changing his prognosis. Pancreatic cancer is not one of those cancers that can be “controlled” by removing metastatic deposits. It also meant that the relief that his wife had felt after the report of our laparoscopy, and the hopefulness that Rufus had before going to sleep, would be replaced by the despair of knowing that he harbored metastatic disease.

The presence of chronic pancreatitis and the added presence of pancreatogenic or type 3c diabetes caused by the pancreatitis is one of the worst combinations of risk factors for the development of pancreatic cancer. This relationship of chronic inflammation and an increased risk of cancer is seen in many tissues throughout the body and is especially well known in the gastrointestinal system. Just as chronic hepatitis or cirrhosis is a risk for liver cancer, and chronic ulcerative colitis is a risk for colon cancer, so is chronic pancreatitis a risk for pancreatic cancer. Therefore, patients with these chronic inflammatory conditions need to be followed with regular surveillance to avoid having an early malignancy missed. Rufus had never had a CT scan until his pain developed.

The effect of diabetes on this process is still not very well understood, but patients with “garden-variety” type 1 and type 2 diabetes have an increased risk of developing pancreatic cancer. The risk is about twice that seen in a non-diabetic population, which is still quite small. It means that about one out of a hundred new-onset diabetic adults actually harbor a pancreatic cancer. This risk is still so small that it is not feasible or cost-effective to look for pancreatic tumors in all newly diagnosed diabetics unless they have a history of pancreatic disease.

To make things more complicated, about 25% of patients with PDAC have a form of diabetes that is actually caused by the tumor itself. New-onset diabetes caused by PDAC usually precedes the discovery of the tumor by 2 or 3 years. However, if the diagnosis of type 3c diabetes could be made when the tumor is barely detectable on EUS, the number of Stage I tumors would increase, and the number of long-term survivors of PDAC would potentially increase. The cause of this tumor-associated diabetes is currently the subject of intense research as we search for valid tests or biomarkers to differentiate the new-onset cancer-related type 3c diabetes from the vastly more prevalent type 2 diabetes.

The Tragedy of Bogus Claims of a Cure of Pancreatic Cancer

Rufus recovered from his abdominal exploration, although his big incision took some time to heal, and his bulk didn’t make the recovery comfortable. He had traveled hundreds of miles to come to my hospital for care, and he and his wife decided to return home and consult with their local doctors. They also began searching for other treatment options. A few months later, I got a letter from Rufus, who wrote that they had traveled to another city more distant from their home than mine and had been treated by a cancer specialist they had discovered online who had given him a course of treatment the form of a daily pill. After three months, Rufus was told that he was “cancer-free.” He was so happy that he had to write me to let me know the good news. I felt so sorry for Rufus and his wife. I knew this was a lie, and they would soon have to deal with another round of disappointment as his metastatic disease inevitably progressed. Rufus died of metastatic cancer six months later.

When patients are confronted with the diagnosis of advanced malignancy, they become prey for unproven therapies and so-called cancer specialists who promise them what cannot be delivered (Figure 2). The problem is compounded by the fact that social media is full of misinformation about cancer and cancer treatments. A recent study in the Journal of the National Cancer Institute found that over 30% of postings contained misinformation on Facebook and other social media, and over 30% were actually harmful1. Among articles containing misinformation, almost 80% contained harmful information. Sadly, articles and postings containing misinformation were more widely viewed and shared than articles and postings which contained correct or factual information. 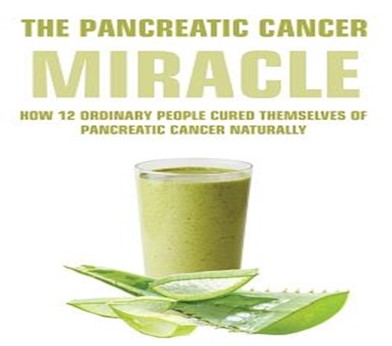 Figure 2. Advertisement for a “miracle cure” of pancreatic cancer.

It is important to base decisions about a bad disease on the best available evidence. For example, when Steve Jobs was diagnosed with his pancreatic neuroendocrine tumor, he initially decided to treat it with vitamin and nutrition therapy, despite appeals from his family and doctors to undergo prompt surgery2. Eventually, he agreed to surgery, but by then the cancer was metastatic and eventually took his life despite the heroic addition of a liver transplant. In their desperate search for help with a devastating disease, pancreatic cancer patients sometimes seek treatment out of the realm of established medical evidence. For pancreatic cancer, the best evidence is usually found at large academic medical centers that are recognized as centers of excellence for pancreatic disease. These academic centers rely on the results of randomized clinical trials, or RCTs, that are the foundation of best medical practice. A list of pancreatic cancer centers of excellence can be found at the NPF website3. For patients with metastatic disease, these centers may offer the opportunity to participate in such an RCT. This is how progress is made in the treatment of pancreatic cancer.