The pancreas is a multi-purpose organ. Most of the gland functions as a factory which produces enzymes which help to digest the food we eat. This part of the pancreas, called the exocrine pancreas, is the part which is the origin of the most common pancreatic cancer, pancreatic ductal adenocarcinoma, or PDAC. The other part of the pancreas is the endocrine pancreas, which accounts for only 2% of the mass of the entire gland but produces hormones which are released into the bloodstream. The endocrine cells, also called islet cells because they are grouped together in nests or islets, are also capable of forming a cancer. These tumors are called islet-cell tumors, or pancreatic neuroendocrine tumors, or PNETs. PDAC and PNETs are usually thought of as completely different cancers, but as the following case demonstrated, they are not always separate.

Sam was a 60-year-old restaurant owner who lived in a rural area of the South. He developed symptoms of “indigestion” after eating fatty or greasy foods. He went to his primary care doctor who suspected gallbladder disease and sent him for an ultrasound examination. The ultrasound showed he had a normal-appearing gallbladder, but disclosed a marble-sized, perfectly round-appearing dark spot in the head of his pancreas, which was suspicious for a tumor. He then underwent a CT scan which showed the area to enhance or “light up” during injection of the intravenous contrast agent, a finding consistent with an islet-cell tumor or PNET (see Figure 1). 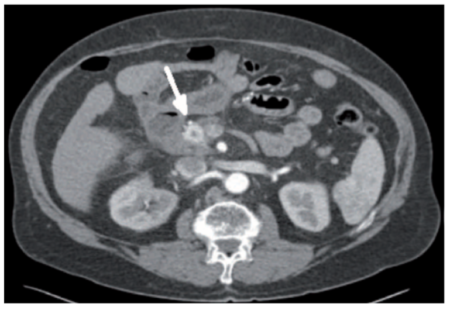 Figure 1. Classic CT image of PNET (arrow) in the head of the pancreas, which enhances on arterial phase.

He had no symptoms to suggest a hormone-producing tumor and was told by his physician that he probably had a slow-growing, “non-functioning” islet-cell tumor. He understood that the tumor would not go away, but he and his doctor agreed to watch the tumor by regular ultrasound exams and to consider removal if the tumor enlarged. A year or so later, the tumor was seen to have grown in size, and he was sent to a nearby university medical center to have a needle biopsy by endoscopic ultrasound, or EUS. The result confirmed the suspicion of a PNET, and the patient sought another opinion after a local cancer surgeon told him he needed a Whipple procedure.

In the course of operating on patients with low-grade or non-cancerous lesions located in the head of the pancreas, I had begun using techniques which allowed a more limited removal of the pancreas so as to avoid performing a Whipple procedure in patients who didn’t need a radical cancer operation. One version of this “pancreas-sparing” surgery was an excavation or removal of the lesion along with a thin rim of adjacent normal pancreas surrounding the abnormality, followed by connecting the excavation site or “divot” in the pancreatic head to a limb of the small intestine. The intestine formed a conduit or “gutter” to carry away the pancreatic juice which inevitably leaked from the excavation site. The juice contains digestive enzymes which could attack the surrounding tissues if allowed to accumulate, and merely leaving a silastic tube as a drain next to the site, an alternative approach used by most surgeons, was uncomfortable for the patient and could take weeks or months to remove as the leak slowly healed. So the excavation and “internal drainage” method seemed to be a better approach, and I had used it in patients with small neuroendocrine tumors. These methods were associated with very few complications and the recovery from these procedures was faster than for the pylorus-preserving Whipple procedure. Sam and his family learned of my experience with these techniques, so they sought my opinion.

During Sam’s surgery, the neuroendocrine tumor appeared on the ultrasound screen to be about a nickel-sized lesion, as expected and was perfectly round and smooth on the front side or anterior surface of the tumor. But it had a border on its posterior or backside that was indistinct or “fuzzy.” This “fuzzy border” was more typical of PDAC and implied that the tumor was either not merely a neuroendocrine tumor, or that the tumor had begun to invade the surrounding pancreas. Either way, this meant that the risk of local spread of the tumor was significant, and that called for the Whipple procedure. I scrubbed out of the operation to go talk with Sam’s family to explain the situation. They understood and, despite being very anxious, agreed for me to proceed with the Whipple procedure.

The operation was a difficult one, due to an unusually soft and fragile pancreas, and there was lots of oozing and bleeding from the surrounding tissues. This meant that the operative field was quite “wet” when we finished. We left large silastic drains in the area, connected to reservoirs outside the body, and closed the abdomen so that we could get him to the intensive care unit to let his body temperature warm-up, which would help correct the persistent oozing of blood.

Meanwhile, I looked at the specimen, the part of the pancreas that had been removed, with the pathologist. We both recognized that the tumor was not a simple, well-encapsulated “marble,” but a mixture of a smooth, round, shiny neuro-endocrine tumor on the front side, and a white, star-shaped nest of scar-like tissue on the backside. Under the microscope, we saw that the well-organized, “well-behaved” PNET had merged with or merged into an ugly, disorganized PDAC, which had spread to multiple lymph nodes. Sam had advanced-stage cancer, and this was very distressing news to his large family.

In the intensive care unit, the bloody drainage slowly collected in the drain reservoirs, and it seemed slow enough to be the type that usually stopped within a few hours. But the bleeding continued, and we took Sam back to the operating room in the early morning hours and re-opened his abdomen. There was still lots of oozing, but as we gently looked behind the remnant of the pancreas, we found a small vein, about the diameter of the opening at the end of a ball-point pen, that was bleeding from its cut end. We secured it with a single stitch, washed out the abdomen with warm, sterile saline, and closed the abdomen again.

Sam had by this time required multiple units of blood in a transfusion, and his course was a “rocky” one in the ICU. He required more support from the ventilator than usual, and within a day or so, demonstrated evidence of acute renal failure. We placed dialysis catheters so he could be supported while his renal failure corrected, but his lung function deteriorated further and he developed patchy infiltrates or cloudy areas of congestion on his chest x-ray that meant pneumonia. Despite broad-spectrum antibiotics and good pulmonary care, his pneumonia worsened. Cultures were taken of his lung secretions every day and showed a mixture of organisms that were not especially worrisome, until the 5th or 6th day when the lab called to say that Sam’s cultures were growing out the fungus aspergillus.

Aspergillus is a fungus which normally lives in the soil and is typically found in rural areas such as on farms or in livestock, or in people who handle livestock. Asperillus pneumoniae is an aggressive infection that is hard to treat, and usually shows up as a cause for infection in patients whose immune system is chronically suppressed, such as transplant patients taking anti-rejection drugs. In a recent study from France, 5% of patients hospitalized with severe influenza pneumonia were found to have aspergillosis in their lungs as well, and the fungus was almost never diagnosed beforehand. Sam certainly had no evidence of immune impairment. He had lived on a farm after first moving to the rural region in which he lived, however, and after starting his restaurant business, sometimes visited local farms to buy meat and poultry direct from the farmers in the area. That was the only feasible connection that might have explained Sam’s exposure to this unusual cause of his pneumonia. His pneumonia was relentless despite treatment with big doses of anti-fungal drugs which only worsened his renal failure. His fungal infection spread to his bloodstream, and despite days of heroic efforts to save him, he died with his wife, his children, their spouses, his mother, and his sister all weeping at his bedside.

Second-guessing the Decision to be Conservative

Sam’s wife, who had been the decision-maker of the family, was distraught over the fact that they had decided to postpone surgery for over a year after the discovery of the original tumor. Their primary care physician had proposed this plan, however, and I told her she couldn’t blame herself if this had been a plan agreed to with their doctor. It is distressing that many physicians have the mistaken idea that PNETs are “benign,” as few of them actually are, and the microscopic appearance of the neuroendocrine tumor on biopsy is unable to differentiate the aggressive ones from the truly benign ones. The fact that there had been not one tumor but two raised the question of why both had not been found on Sam’s initial testing. The PDAC was hidden from view by the more obvious neuro-endocrine tumor until we had been able to view it from all angles in the operating room. The finding of advanced-stage PDAC ultimately meant that Sam was likely to have suffered an early recurrence of his cancer if he had survived his surgery, but this fact did little to assuage the feeling of tragedy that consumed us all.

The risk of advanced disease, or spread of cancer cells from the primary tumor, is much less and much slower for PNETs, than for PDAC, but it is not zero even for small tumors. Fewer than 10% of small, stage I, PNETs harbor lymph node metastases at the time of surgery, but even small tumors can have begun to spread. PNETs are typically very slow-growing, and even patients with metastatic PNETs have very slow progression of disease, so it has become common for doctors to adopt a very conservative approach to treating small PNETs. The aggressiveness of the malignancy varies from one PNET to another, with tumors that produce insulin, known as insulinomas having the lowest risk, and tumors which secrete hormones such as glucagon and gastrin having the highest risk. The PNETs which don’t seem to secrete any active hormone, the so-called “non-functioning” PNETs, have an increased rate of spread, so that all PNETs need to be treated aggressively. But I’ll never know if the outcome of Sam’s surgery would have been any better if we had operated upon him one year earlier.