A Patient and Caregiver’s Perspective – June and Rod’s Story 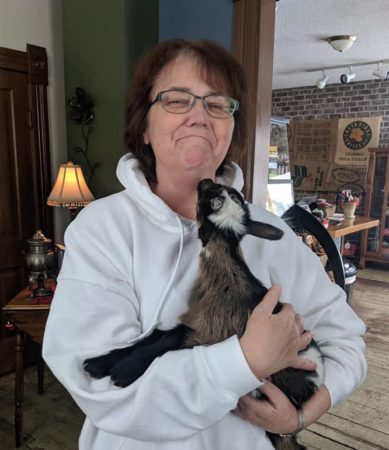 My official journey with pancreatic disease began in February 2012 when I was diagnosed. I had my gallbladder removed back in 1982 after delivering my first child. For years I would experience what to me felt like gallbladder attacks. A searing knife like pain in my back that extended through the front, intense nausea, and what seemed like severe heartburn. I was told it was heartburn, reflux, indigestion, and even that it was all in my head. The pain would drop me to my knees, I would reach for Advil and my heating pad and retreat to my bed crying until it passed. I was told in Canada, where I was from and then again in the US, that it was nothing to be concerned about for literally years.

One day my husband came home from work, put me in the car and took me to my doctor who took one look at me (I was bloated to the point of looking like I was going to deliver a baby) and sent me to the hospital for blood work and a CT scan. After the scan was done, I was sent home. My doctor called me the next morning and told me to go immediately to the ER. I said I would wait until my husband came home. I will never forget his words. “No, you are not understanding me, it is not a choice, you have acute pancreatitis and it can kill you. You have to go now.”

The next week was a blur, I don’t remember much, but my husband mentioned to me sometime later, that he was told, if she makes it through the night, she has a good chance of surviving. They were concerned my heart would fail as my potassium was almost non-existent. When I was finally with it enough to grasp what was happening, I started asking questions, and not getting many answers. 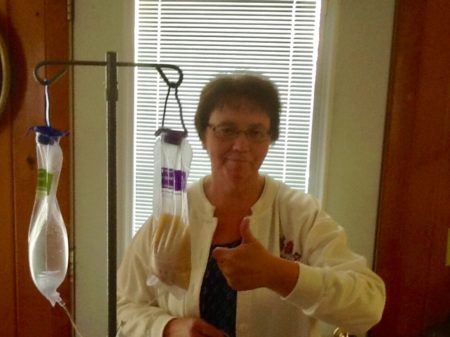 June with her GJ feeding tube

After another week and a half, I was released from the hospital and was now an insulin dependent diabetic. To say I was overwhelmed was an understatement. What happened to me, to so totally turn my life upside down in a matter of weeks? I was basically in bed the better part of the next six months as the pain and nausea were very hard to deal with. My husband would take me for walks to gradually build my strength back up. I remember when we started I couldn’t even make it to the house next door, let alone back.

I feel very fortunate to have had good doctors for the last seven years. I have not had major surgery like so many patients. I have had several endoscopic retrograde cholangio-pancreatography (ERCP) to clean out my bile and pancreatic ducts when they become blocked, sphincterotomies, along with numerous stents to keep them open and working. I had a GJ feeding tube for seven months, which greatly helped me to get my pain under control.

At this point in time, I am blessed to live a fairly normal life with the help of Celiac Plexus blocks every few months to control the everyday pain, nausea and take oral meds when I experience a flare. The unpredictability of not knowing when it will flare up has kept me from working. I don’t have the stamina I would like, but I am able to travel and can still accomplish a lot on a good day. I am not eligible for the TP/IAT, which was disappointing, but I want people to know you can live a full life with pancreas disease. It just takes some adjustments, I cannot tell you how many times I have had to change plans at the last minute. I learned that what I can eat one day might set my pancreas off the next day. I do best with a low fat, low sugar diet, and eat smaller portions more often. I have learned when I feel the first sign of pain to stop eating and stick to clear fluids only. My heating pad has become a good friend! Excessive stress will catch up to me and trigger my pancreas. It is definitely a balancing act. Some days are better than others. You make the best with the hand you are dealt. 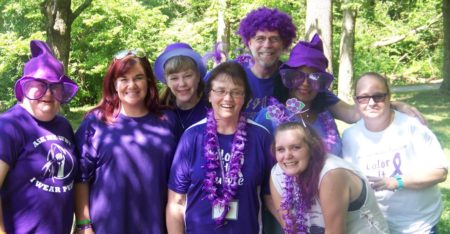 During my down times, I read as much as I could find and started to connect on Facebook with others who had pancreatitis. One day I saw Dan Spracklen from the Ohio Kentucky Chapter of the National Pancreas Foundation (NPF), post that he was meeting some other patients in Toledo, Ohio for coffee and asked if anyone would like to join them. My husband thought I was nuts to drive that far (2 hours) to meet total strangers. Dan and I had chatted online on and off for several months. My husband came with me and together we met a few others with pancreas disease. It was so liberating to meet people who could identify with what I was experiencing. I met Dan again in 2015 at another coffee shop in Indianapolis, when he was just beginning a road trip across the country with his Dad. It was there I learned about the NPF, and asked how I could get involved. The fire was lit! When I found out Indiana needed a chapter, I mulled it over for a long time before I signed up in January 2016. My sister was the one who pushed me into doing it, she thought I would be good at it which gave me the confidence to move forward. I am forever grateful to her. Right out of the gate I was sidelined by a pesky brain tumor that I had radiation for. My first event was attending a Fellows Symposium in Chicago, sporting a walker, as I had a few side effects from the radiation yet. I could not listen to the presenters enough. I wanted to know more. 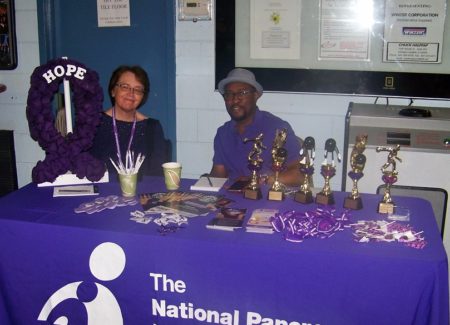 I feel blessed to have a great Medical Director for Indiana, Dr. Jeff Easler from IU Health in Indianapolis. He has helped to put together informative speakers for our support groups, organized a great Education Day for patients and their caregivers, presented awards to patients at our bowling events. I have been able to travel to Pittsburgh and take part in the Caper Program and Pancreas Fest. I love having the privilege to set up an information table at various places and to be able to talk to people about their pancreas! For me, the most rewarding aspect of having a disease such as this and being an advocate, is to be able to bring hope to someone who had none. To hug someone who has felt hopeless though their illness, to reassure them they are not alone.

The one piece of advice I give patients, is to learn as much as you can. The more accurate information you have, the better equipped you are to be able to cope and live with this disease. Yes, it is a life changer, no doubt about it. Find yourself a doctor who is knowledgeable about pancreatitis. Look to major teaching hospitals, check out the certified NPF Pancreatitis Centers on the NPF website. Connect with others around you who can relate to what you are going through. Having a chronic disease can be depressing, painful, overwhelming at times. You are not alone! I am truly thankful for the people I have met since becoming ill. You are my inspiration 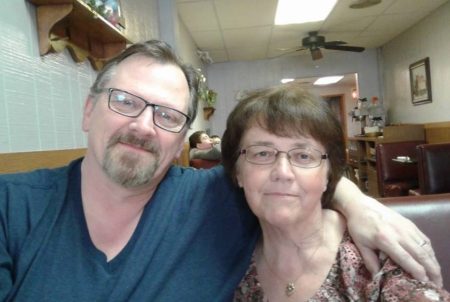 In 2012, our whole world was turned upside down. Prior to June being admitted to the hospital, I had never heard of pancreatitis, let alone acute or chronic pancreatitis. At that time I can clearly remember the nurse saying, “I can’t believe she is still with us” and later the doctor saying “well, we will see if she makes it through the night.” Their statements really grabbed my attention and made me wonder what the heck was going on.  As soon as pancreatitis was mentioned by the doctor, our research for information began. At that moment, my role as a husband changed to include caregiver. We were in this together, no matter how difficult it would become.

As a caregiver you have to be always observant and alert. There were mornings when getting up that I would almost freak out as I checked to see if she was still breathing and other times I kept her from freaking out as she had a feeding tube put in or undergo treatments. Since she became diabetic as a result of pancreatitis, I watched for abrupt mood changes, which alerted me to her blood sugar being off. But each time June’s pancreas flares up, I feel so helpless. I try to make her comfortable the best I can and watch her closely for signs she is getting worse, then it is off to the hospital.

My role as a primary caregiver included being a patient advocate, negotiator, and chauffeur to doctor and hospital visits, tests, treatments and to deal with the financial strains that followed. My advice to other caregivers is that this disease is a real test on relationships, as a spouse and caregiver you must realize the other person did not ask for this disease, they just want to be normal, but that’s not the reality. You have to adjust, communicate, have patience, understanding, and be compassionate and strong. Make sure you take some “me time” for yourself and when things get rough do not run away, instead reach out to others for emotional support or advice. We share many of these circumstances and together can become stronger.

During those first two years our only training was on diabetes, as we struggled to find reliable information about pancreatitis. Then in 2014, June came across the NPF website. The NPF provided us with so much more information that we attended a “Meet & Greet” held by the OH/KY chapter. On our way home we decided to become involved with the NPF to help educate others about this painful disease. Since then I supported June and the NPF with various fundraisers, picnics, and campaigns. The NPF has broadened my awareness of this disease by allowing me to attend educational conferences and in return it has allowed me to help others through support groups and being a part of the amazing education program put on by our the Indiana Chapter Medical Director, Dr. Jeffery Easler and his colleagues from IU Health. The NPF has provided me the opportunity to give back to the community by being a consumer research advocate to promote a better understanding of the disease and in developing better treatments.