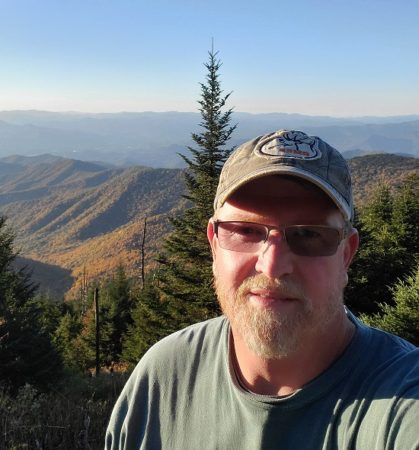 On February 20, 2012, I was introduced to pancreatitis. I’d never heard of it before that day. I woke up around 6 am, showered, ate breakfast, made my lunch for work. I vaguely remember my wife driving me to my doctor’s office. I don’t remember much about the next eight days, which were in ICU. It was a severe acute attack from too many gallstones. I was so weak for a long time after that. They said that I needed my gallbladder removed and that I needed time to recover before they’d do surgery. A week and a half later, one evening my wife and oldest daughter went to help babysit at church. My younger daughter, 15, was babysitting me. My body wasn’t functioning properly, and, dehydration got a hold of me in a bad way. My eyes rolled into the back of my head, and I passed out, permanently scarring my daughter. She called my wife, who was already on her way home and called 911.

An ambulance took me back to the hospital, where I passed out again. When revived, I had seven people over me, taking care of me. A few days later, my gallbladder was finally removed, and I eventually recovered. I missed three and a half months of work. Everything went back to normal after that. I lived my life as I had. I realized one day that, while I didn’t remember those eight days, my family lived through them in horror. They told me that I almost died twice. It’s such a weird, hard experience to lose eight days of your life. I asked so many questions for months after, trying to fill those voids. I still do ask a question every now and then. I wish that I could say that my story ends there, but, like so many others, that was just the start.

After enjoying normalcy for almost three years, I started having pains again in the fall of 2014. Just every so often, and suspected the pain was pancreatitis again, but I wasn’t sure, because I not really remembering much from my first attack. March 5, 2015, I couldn’t take it anymore and asked my wife to take me to the ER. They did a CT Scan, and said that it was pancreatitis, but they weren’t sure what was causing it. Over the next two and a half months, I spent another nine nights, and five other trips to our small-town hospital. In the middle of that stay, my primary doctor had scheduled an appt with a GI physician. Being a new patient, the appointment was not for a couple of weeks. That changed after another hospital stay. My primary doctor was able to persuade my new GI doctor to perform an EUS to find the cause of my pancreatitis.

After I woke up, he told me that I had three gallstones blocking my bile duct. I still produce gallstones without a gallbladder. This was done two hours away, in Atlanta. So, they scheduled an ERCP for the next morning. We got a hotel and stayed in Atlanta that night. They removed the gallstones, and also did a sphincterotomy, making the opening of my bile duct larger, so that new gallstones could pass naturally. Once again, I wish I could tell you that my story ended here, but, I cannot. 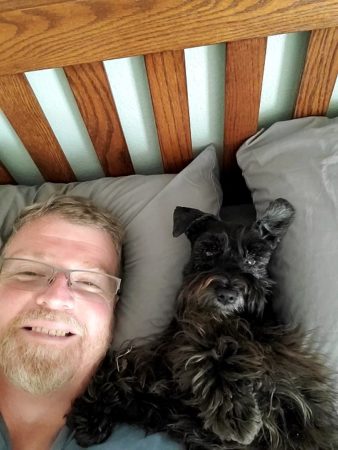 Vince with his family’s’ miniature schnauzer, Molly who has been a great companion during his pancreatitis attacks.

I was so hopeful that normal would find me again. That, those stones were the source of my troubles. That they were causing my pancreatitis, but, I still ended up back in the hospital. There are two, more rare, side effects from a sphincterotomy. When they make that incision, the enzymes can go up or down within your body. If they go up, you end up vomiting a lot. If they go down, you have diarrhea.

Lucky for me, I had both. I lost 25 pounds in five days. The hard way. My second visit with my GI doctor was for this. He gave me medication to help with both. My wife suggested that I write down a short diary and I gave it to the nurse. When my doctor came in, he apologized for being late, but, he was reading the book that I’d written. He said that, after reading it, he wasn’t sure if I actually was having pancreatitis attacks. He looked at me, sort of turned his head a little, and an actual light bulb appeared above his head! He said, you know, you may have autoimmune pancreatitis (AIP). He gave me a brief description of what that was. With AIP, the body thinks that my pancreas is infected and tries to fight it off, causing pancreatitis. He said that steroids, larger doses, help lower the body’s immune system, and can help put pancreatitis into remission. But, if you have pancreatitis for any other reason, steroids can make your pain worse. He ordered blood work, to confirm AIP, and sent me home with a prescription for 40mg of Prednisone a day for the next month.

On the fourth day of the steroids, I felt like a new person! I had energy to spare! I was also eating like I had when I was a teenage football player. After seven weeks of 40mg a day, I started tapering by 5mg each week. When I got to 15mg, I had another attack. Back up to 40mg for a month, then tapering again. At 10mg, another attack. Back to 40mg. Two weeks in, another attack, I had stumped my GI doctor. Every other patient he’d had in the past never called him back after one round of steroids. He did some reading, and suggested that we try an immunosuppressant drug called lmuran. That it did almost the same thing as steroids, but, without the energy, eating, or insomnia issues. It could affect my liver, but, that didn’t happen to most people.

Well, I’m not most people. My body could only tolerate half the dose that I needed. Even then, it was affecting my liver. There was hope. My doctor had a colleague at Emory in Atlanta who specializes in AIP. I had to jump through hoops in order to get my former insurance company, to allow me to get to see him. Dr. Field Willingham is amazing! We talked about all that I had been through at that first visit. He told me about a wonderful rheumatologist (Dr. Arezou Khosroshahi) who also, after speaking with him, gave me more hope. Dr. Willingham and Dr. K (as we all call her) did more blood work on that 1st visit (15 vials), and, it showed that I have type 1 AIP (there is also a type 2). Type 1 AIP is also an igG4 related disease and can affect almost any organ in the body, but, I’m “lucky” that it only affects my pancreas. The gold standard for my AlP, is an infusion called Rituximab. Unfortunately, that hope wasn’t realized with that insurance company. I was on Imuran for two and a half years, damaging my liver every day. My wife accepted a full-time position with her company, and I was finally able to get the infusions and stop taking lmuran. At that point, I was still taking a low dose of prednisone also. When I was able to stop, I’d been taking some form of prednisone for nearly four and a half years. Coming off of it after being on it that long was not fun. 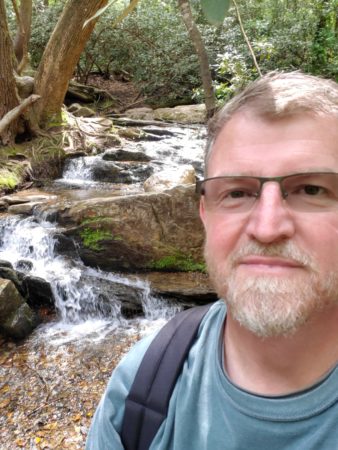 I had my first round of Rituximab in Feb 2019. 1 round is two infusions, two weeks apart. It’s pretty expensive too. Nearly $17,000 per infusion. Luckily, I married my wife for her health insurance. Dr. Khosroshahi had to work her magic to get them to cover these months later in August that year. They’ve been a game-changer. Not only for me but, for so many others. I wish anyone who needed them was able to get them. Since then, she checks my blood work every three months to see when, or if, I’ll need another infusion.

Pancreatitis leads to so many other health issues as well. Prior to pancreatitis, I had slightly high blood pressure, for which I took one pill a day. Since then, I have high cholesterol (after they removed my gallbladder) I have gastritis, I get flare-ups of gastroparesis, I’ve had Afib 4 times, I have exocrine pancreatic insufficiency (EPI) like so many of us have, and I’m a type 3c diabetic (which is grossly misdiagnosed in our community).

Every day that I wake up is a great day. I’ve been through so much, but, am doing very well now. There are too many people out there that need serious help, and aren’t getting it. I’d like to thank the National Pancreas Foundation for everything that they do for us. Thanks for taking the time to read my story. Stay tuned too. I plan on adding more better chapters.