Most pancreatic cancers are “sporadic” or occur without any known precipitating causes. Some tumors are associated with certain gene abnormalities which are passed along in families, but these account for only about one out of 20 pancreatic cancers. Pancreatic neuroendocrine tumors, or PNETs, are caused by gene mutations entirely different from those of garden-variety pancreatic cancer or PDAC. PNETs are slower growing and less aggressive than PDAC but can still spread beyond the pancreas, metastasize, and cause death. In addition, there are a handful of hereditary syndromes with gene mutations that are associated with PNETs. Knowing that a patient has such a syndrome is reason for close vigilance.

Wendy was a 30-year-old woman with long blonde hair, a beautiful smile, and big brown eyes. She had a known diagnosis of Von Hippel-Lindau syndrome, a hereditary syndrome caused by the mutation of a particular gene that results in the development of a number of different tumors, including a common kidney cancer called renal cell carcinoma, a malignant tumor of the eye called retinoblastoma, and, rarely, pancreatic neuroendocrine tumors. Wendy’s mother had been the unknowing carrier of the mutation until she became ill with renal cell cancer. Then Wendy had to have her left eye removed as a consequence of having developed a malignant retinoblastoma. Her prosthesis was a perfect match of her beautiful right eye.

Wendy had been seen for some time by a gastroenterologist after she developed symptoms of pancreatic enzyme deficiency. Despite having a good appetite, she was losing weight and noticed that her bowel movements were bulky, foul-smelling, and floated on the toilet water. These are classic symptoms of loss of function of the glandular portion of the pancreas, the so-called exocrine pancreas, that produces the enzymes which are normally delivered into the intestine through the pancreatic ducts. A CT scan showed a perfectly round mass in the head of the pancreas, consistent with an islet-cell or neuroendocrine tumor, and showed small masses in her right kidney consistent with renal cell carcinoma. It was decided to treat the renal tumors first. So she underwent removal or “coring out” of the renal cell carcinomas by a urologic surgeon, which is a standard approach to this disease in order to spare as much of the kidney as possible for as long as possible.

Meanwhile, the tumor in the pancreatic head continued to enlarge; although there was no sign of spreading, her doctors had been reluctant to subject her to another big operation so soon after the last. When I first met Wendy, she was amazingly upbeat, well-informed, and knew as much or more than I did about Von Hippel-Lindau syndrome. She had an optimistic attitude and made it clear that she intended to do everything she could to stay well for as long as possible despite her disease.

After taking a history and reviewing her records, I asked to examine Wendy. When I placed my hand on her abdomen, I immediately felt an orange-sized, firm mass in the area of her pancreatic head. This shocked me as we don’t usually feel pancreatic tumors on physical exams. I then looked at the latest CT scan, which had just been completed, and felt terrible for her as it showed a relatively huge pancreatic tumor (see Figure). It also showed renal cell tumors in the left kidney, which were new. 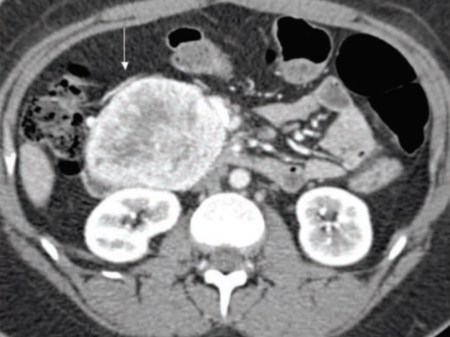 Figure 1. A large pancreatic neuroendocrine tumor is seen arising from the head of the pancreas (arrow). It appears bright as it characteristically enhances during intravenous contrast infusion (as opposed to PDAC, which remains dark).

I operated upon her together with the urologic surgeon who had treated her previously. After he removed the tumors from her left kidney, I proceeded with a pylorus-preserving Whipple procedure. I was relieved that the tumor was not attached to the portal vein, and despite its large size, showed no evidence of local spread or invasion.

Wendy tolerated the operation perfectly, was out of bed the next day, and was home within a week. She continued to take her pancreatic enzymes with meals and was back to her usual routines in about a month. On her follow-up visit, she wanted to know what adjuvant therapy she could take to prevent a recurrence of the neuroendocrine tumor. When told that there wasn’t any effective adjuvant therapy known at that time for neuroendocrine tumors, she asked to see an oncologist. She argued that she wanted to do everything she could to reduce the chance that her tumor would recur.

Eventually, she received a course of radiation therapy to her upper abdomen. I told her that there was little evidence to suggest that this would prevent the recurrence of her tumor, but she underwent the treatment anyway and had no significant side effects. Now, for over ten years, she has had no recurrence of her tumor. She continued to be treated for recurrent renal cell tumors, but she was otherwise doing well at last report.
Testing High-Risk Patients

Some families with PDAC have an unusual number of family members affected by pancreatic cancer. Probably the best-known example is President Jimmy Carter’s family in which his father and three of his siblings died of pancreatic cancer. The risk of having a PDAC develops increases if someone has two or more blood relatives who have had the disease. These patients are often seen in a “high-risk” clinic where periodic imaging of the pancreas is performed to look for abnormalities. These clinics are helping to define the guidelines that govern how these patients are evaluated and how often they should be seen. They are also helping to discover early-stage cancers and biomarkers of the disease that can predict with accuracy who will actually develop pancreatic cancer. In Wendy’s case, a hereditary condition with a known risk of pancreatic tumor had produced an obvious tumor which had been ignored, or at least not acted upon, but with a surprisingly good outcome.

For people who have a history of pancreatic cancer in two or more “first-degree” family members (parents, siblings, or children), or for people who harbor a known gene mutation that is a recognized risk factor for PDAC or PNETs, regular testing to look for the presence of a pancreatic cancer is usually recommended. The problem is, we still don’t know what the best form of surveillance is (endoscopic ultrasound or EUS versus magnetic resonance imaging or MRI, for example), what the proper frequency of surveillance should be (every six months versus every year), and what additional tests should be performed if one or more imaging study doesn’t look normal, but doesn’t clearly show a tumor. To complicate matters, screening for pancreatic cancer is frequently not covered by commercial insurance because there is no standard test or series of tests that have been shown to change the outcome of pancreatic cancer treatment effectively. So current studies are underway to identify the procedures and schedule of surveillance for PDAC and test possible biomarkers of cancer in patients at high risk.

Some information is available through the NPF website (www.pancreasfoundation.org) to help folks decide whether or how they should seek a consultation about surveillance. A video series about early detection and risk factors for pancreatic cancer is found under Patient Information – Pancreatic Cancer. It can help answer questions and provide guidance to individuals and their families.